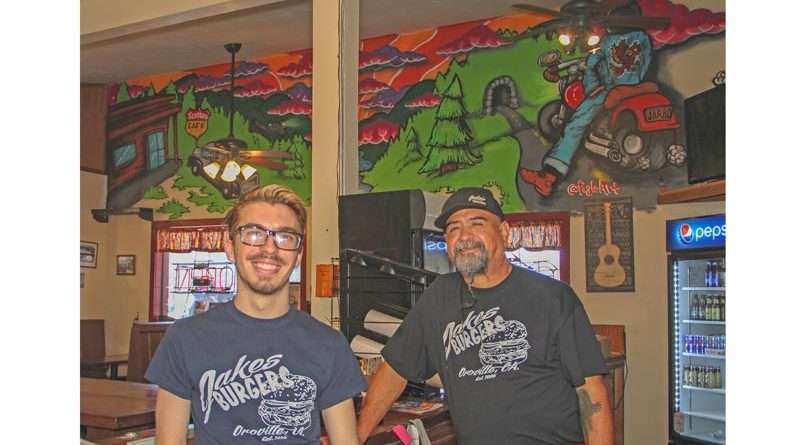 Jake’s Burgers Manager Tristin Hardwick, left, and cook Nate Leal, both from Oroville, staff the popular burger house for Justine and Jeff Jacobsen, the new owners (not shown). Overhead in the background is the famously evocative Butte County Camp Fire memorial mural painted in 2018 by Carolina artist Rob Fogel who was visiting a friend at Bardee’s Bar when the devastating fire broke out. The mural features Scooters founder Dan Salmon (minus his ponytail) on a Harley, riding along the Feather River toward one of the tunnels. A train makes its way past Dan’s 1952 Chevy pickup and the bike’s license plate reads JARBO while flames leap in the side view mirror.
News
November 20, 2019November 26, 2019 Will Farris, Staff Writer & Roni Java, Staff Writer

The trade of 2 acres of land in Big Bend provided the seed money for Dan Salmon to buy a rundown mini-mart at Jarbo Gap, where the Sacramento Valley meets the magnificent Feather River Canyon.

The store was attached to 40 acres of mountainside, a bunch of trees and little else. Salmon commenced to gut the little store, add a kitchen and open a diner. This was his dream, a diner in the mountains. Five years into running the restaurant he met Bonnie, who would shortly become Mrs. Salmon.

“What do you love?” she asked him.

“What do you love more than anything else in the world besides me?”

“There you have it then. We will call the place Scooters.” And a landmark was created. For the next 21 years folks entering or leaving the Canyon stopped or passed by the iconic diner. Almost always, even in marginal riding weather there would be some kind of motorcyle(s) parked outside.

Bonnie decorated the place in highway motif mostly motorcycle, but included was a remembrance to Dan’s parents, Grady and Bobby. Dan created a pastrami sandwich the Fatboy Burger and concentrated on making really good, simple food.

The years passed and the couple watched as various wildfires burned in the Canyon and around their neighborhood. They kept a defensible space around the restaurant and their home, and business went on as usual.

Then came the most destructive fire in California’s history. High winds and a tinder dry forest made for a fire out of the depths of hell. It began in neighboring Concow and roared down to Paradise destroying both communities. Dan said it was crazy because the winds kept shifting as the fire burnt around Scooters.

Finally the winds, strong to begin with, were fed by the firestorm and reached 80 mph. Across from the diner a wall of flame appeared. One tree, burning manically, had the flaming top break off and drop onto a fire engine parked in front of the restaurant.

The crew scattered behind Scooters and the wind picked up the burning treetop and sent it over to the diner where it destroyed the split rail fence around the outside tables and burned part of the outside wall. Dan credits the fire crew for getting the flames out before they could do any more serious damage.

It survived, did Scooters. The Rock House, an older restaurant down the road, was gutted, leaving only the outside rock walls standing.

There was no power, but once that was restored Scooters was open for business.

Dan and Bonnie Salmon retired Sept. 27. Scooters is now Jake’s Burgers. It was purchased by a couple in Oroville who have another restaurant with the same name. Dan has lived out his dream and Bonnie joined him in the venture. Today they are looking to the future and whatever adventures come their way.