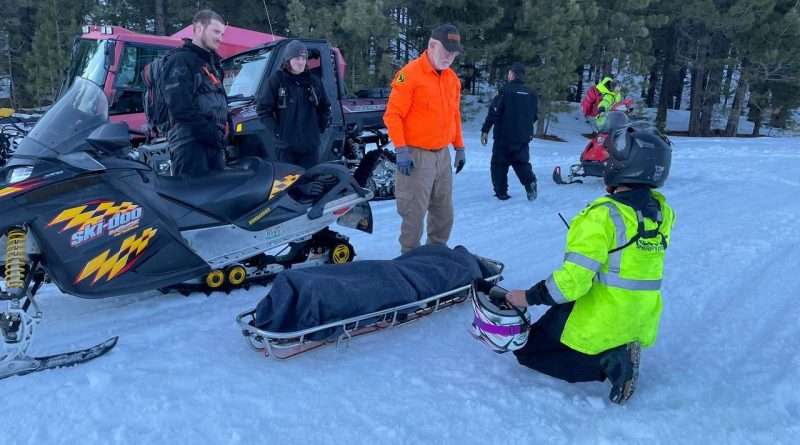 Three snowmobilers were injured Jan. 16 when two snowmobiles encountered a creek in the middle of a meadow. Photo courtesy of Plumas County Search and Rescue
News
January 17, 2022January 20, 2022 Editor

When Plumas County Search and Rescue responded to a call for assistance following a snowmobile crash, the afternoon of Jan. 16, they weren’t sure what to expect, but were prepared for the worst. “When we got the initial call, we thought it was bad,” said Mike Grant who heads the local rescue group.

Grant described what happened. Two snowmobiles (one with two people) were running close together through a meadow. “They failed to see the creek in the middle of the meadow until it was too late,” he said. The snowmobiles flew over the creek and into the opposite bank.

All three were injured, but were able to get off their sleds and were assisted by other snowmobilers.

When Search and Rescue set out, they weren’t exactly sure where they were going and were being assisted by both CHP and SEMSA Air 1 helicopters. While they were searching by air, the snowmobilers were transporting the victims from the site of the accident (near Walker Mine) down to the west side of Lake Davis and that’s where they met up with Search and Rescue. Grant said they transported the victims the last two miles to a waiting ambulance.

Grant said it appeared all three had orthopedic injuries. Two were able to walk, but the third had a leg injury and could not.

Two of the injured were transported by ambulance, and the third was taken by helicopter once the ambulance reached Nervino airport in Beckwourth. Grant said he doesn’t know the current condition of the riders nor their identities, but believed based on some of their statements they were from the Portola area.