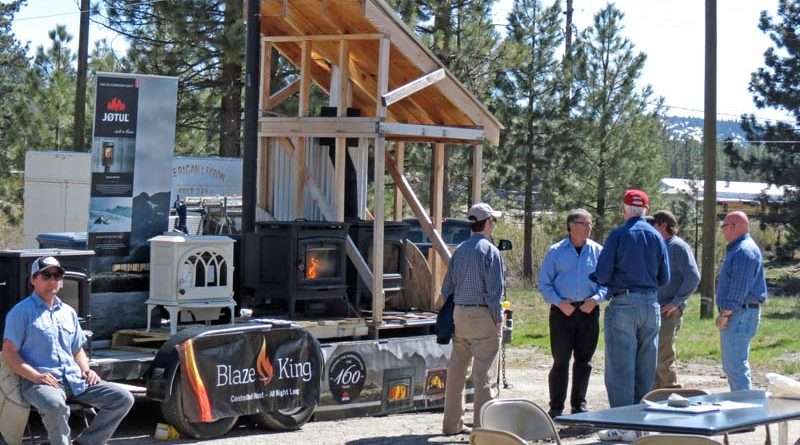 The sun shone down on all who attended the wood stove fair in the Veteran’s Hall parking lot in Portola on April 21, with many enjoying the comprehensive information given by vendors and representatives. Photo by Lauren Westmoreland
News
May 5, 2017May 5, 2017 Lauren Westmoreland, Staff Writer

The sun made a welcome appearance for the outdoor event, which was lightly attended. Julie Ruiz, air district air pollution control specialist, noted, “Because it was such a lovely day, we had a smaller turnout than hoped, but my personal thought is that the folks in Portola have had it with winter and were enjoying the outdoors.”

The wood stove fair was intended to educate and promote the wood stove change-out program to qualified homeowners within the greater Portola area for replacement of non-EPA certified wood stoves with new, efficient, cleaner burning EPA certified devices. The Portola area is a PM2.5 non-attainment area, resulting in efforts to minimize the air quality effects of wood burning stoves.

The stove change-out program is funded by the EPA’s 2015 Targeted Air Shed Grant Program, the air district’s AB2766 program and other agencies. This five-year voluntary program is only available to residents within the non-attainment area.

The event was attended by representatives of the EPA, the state air resources board and Hearth Patio & BBQ Association who traveled from the San Francisco and Sacramento areas. Representatives answered questions regarding wood stoves, air quality and more.

Corby Erwin of Plumas-Sierra Rural Electric assisted with the event at the sign-in table, as well as Maricela Ramos, greeting all comers with a smile and opportunities to win prizes such as a wood shed and Leonards’ gift cards. There were also “swag bags” handed out, filled with information on fire safety, some of which was contributed by Hannah Hepner of the Plumas County Fire Safe Council.

Two stove retailers from within Plumas County were also in attendance, displaying pellet

Wolf Creek Wood Stoves, with locations in Greenville and Portola, showed off efficient models to heat homes. The Quincy Hot Spot in Quincy also brought efficient stoves. Both retailers have been a part of the effort to change out wood stoves in the Portola area since the inception of the program.

Thirteen new applications for the wood stove change-out program were received at the fair, with three additional applications received after the fair took place.

“I would like to point out that this program is a long-term solution to cleaner burning,” said NSAQMD Executive Director Gretchen Bennitt. “These stoves last for generations, and it makes sense to change to a cleaner-burning appliance, especially when it is so cost-effective.”