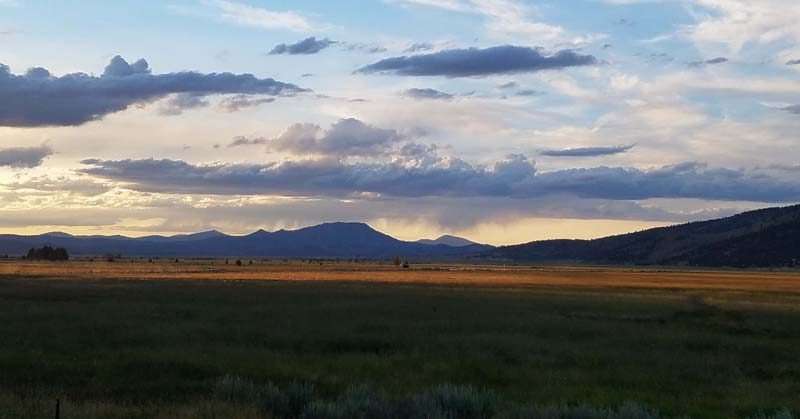 A recent evening view near the Main Lodge at Sierra Hot Springs looking out over the Sierra Valley, which is a haven for a wide variety of wildlife. Photos submitted
News
January 30, 2017January 27, 2017 Lauren Westmoreland, Staff Writer

Sierraville is located in the Eastern Sierras, at the south edge of the largest alpine valley in the continental United States. It was one of the earliest communities settled in the Sierra Valley, and prospered during the Gold Rush era. Sierraville also holds a well-kept secret: the Sierra Hot Springs.

The naturally occurring hot springs, bordering the edge of the Tahoe National Forest, rest on 680 acres of forest land and are recorded as first being used as a “rest stop” for the Washoe and Maidu Native Americans in the winter seasons.

Time passed and pioneers began to arrive in the valley, discovering the lush vegetation and the dense population of wildlife that sustained the native inhabitants for so long.

By the spring of 1853, a Mr. Corel Howk and his wife Ordelle C. Howk, the second white woman ever to live in the valley, found a ranch to their liking on the southern fringe of the Sierra Valley. This ranch, soon called the Howk Ranch, included sulphur springs and was the predecessor of what is now the Sierra Hot Springs.

According to an “apocryphal tale” told by a man identified simply as “Prospector” from the Mountain Messenger on June 27, 1863, the discovery of the hot springs was recorded as follows, “A good story is told concerning them, which is vouched for by a gentleman of reliability (accent on the second syllable). He informed me that they [the springs] were first discovered by a gentleman from Pike, who, while crossing the plains, chanced to find one of these springs boiling and smoking away like a steam engine. For a moment he gazed in blank horror, and then turning he ran back to his train, shouting as he ran, ‘Turn back, for God’s sake, boys, hell isn’t a half mile from here!’”

However it happened, the hot springs on the Howk Ranch became widely known for their therapeutic value during the 1850s. Corel Howk developed the springs, and visitors came from throughout the Mother Lode to “take the waters,” which were said to ease ague, rheumatism, bursitis and “the weekly miners’ hangover,” according to a 1971 interview with historian James Sinnott.

The hot springs property was sold to David Fenstermaker for $2,000 in 1861. At the time, the property was comprised of a little over 160 acres, “together [as the deed explains] with Sulphur Springs and bedding of the house and furniture and kitchen furniture.”

Fenstermaker has a historical reputation as a hustler who greatly improved the springs as a resort, adding to the ranch by claiming another contiguous quarter section with Louisiana Civil War script, the paper currency of the time.

Campbell became a part of the Sierra County Mugwump Republican party reform movement in 1881, leading to political violence erupting in 1882 on a Friday evening in mid-September.

Reportedly, Campbell was at his leisure on the front porch of the Randolph Hotel, when a man named A. J. Stubbs approached, called to Campbell, and drew his revolver, gunning down Sheriff Campbell in the street. This led to a screaming headline in the Sierra County Tribune, stating, “Assassinated! John Campbell shot dead. A dastardly deed – Great excitement created – Two hundred armed men scour the country!”

In all the excitement, Stubbs managed to evade the lynch mob and was later tried and convicted of murder, leading to a sentence of 18 years in San Quentin.

The history of the hot springs was not quite so violent after that event in 1882. In the years to follow, the resort would be sold multiple times to various owners until 1945, when the “Campbell Hot Springs Corporation” purchased the resort and held it for nearly 17 years.

An event of note took place in 1959 during the Cold Creek Fire, which swept the area on the Fourth of July weekend. Despite the tragic loss of much property in the area, firefighters and bulldozers managed to save the historical resort — but not without a humorous event.

According to William G. Copren, when the hotel was threatened in the fire the proprietors removed their extensive and expensive liquor inventory from the hotel and placed it in the adjacent former 6-foot deep swimming pool, in the attempt to “at least save something.”

Well, the fire-line was being held by a crew of “hot shot” firefighters flown in from Arizona. The thirsty men on the crew quickly discovered the stash of alcohol in the pool, and the inevitable happened. Two fully clothed men dove into the pool and began handing out cases of beer and bottles of whiskey. The booze was passed from man to man up a “bucket brigade” all the way to the fire line. That night, states Copren, significantly more liquid was drunk than was put on the fire.

The corporation that held control of the hot springs disbanded in 1963, transferring ownership to Vivian Maatta and John and Louise Filipelli.

After some years passed, the ownership of the hot springs went to Leonard Orr in the late 1970s. The reputation of the hot springs as a place of healing mineral baths had not diminished with time and additions were kept up with on the property, such as the $75,000 air-strip in Dearwater Field less than half a mile from the resort, which allowed guests to arrive by plane and is still in operation to this day.

In the early 1990s, according to current manager Kaisa MacDonald, the hot springs went under the ownership of nonprofit group NACOB, or New Age Church of Being. This led to a time where the Sierra Hot Springs was also home to a commune, or “consciousness village.” MacDonald herself was a resident of the hot springs during this period, and commented that there were many international visitors during this time, especially from India.

“I spent my childhood in Sierraville and explored the forests to my heart’s content when I was younger,” MacDonald smiled. “There is so much history here, and natural beauty. I left the hot springs for a time, but ended up coming back in 2003, and I’ve been managing Sierra Hot Springs ever since.”

MacDonald spoke about the way things have changed over the years since she’s been at Sierra Hot Springs, and despite the many faces it has worn, the hot springs remain a constant.

“This is a sanctuary,” MacDonald said. “I view this as a place to let go of concerns, relax, connect with nature — all of which is very important in today’s hustle, bustle society.” ves from all around the world to visit the scenic and historically rich beauty of the Sierra Hot Springs, and, according to MacDonald, unprecedented tourism from China has occurred since the taping and airing of a tourism video at the Hot Springs, which is now the number one hit on Google in China for those researching hot springs travel destinations.

“Many come for the hotel and the hot springs, and end up finding so much more in the diversity of wildlife that can be found here, such as deer, hawks, mountain lions, coyotes, bears, year-round frog symphonies and more. There are many hiking trails on the property, and the national forest borders the area as well.”

With the Main Lodge, the Globe Hotel, and the Philosophy Café, (built in the existing old saloon downstairs at the Main Lodge in the mid-‘90s), there have been improvements and changes to the Sierra Hot Springs, including the filling in of the old “cold pool” that used to be directly next to the Main Lodge.

“Many locals have fond memories of learning to swim in that old pool, but it had to be filled due to aging issues,” said MacDonald.

MacDonald has future goals in mind for expansion. “We took four years to create a master plan for the Sierra Hot Springs, before submitting it with Sierra County, as we are looking into developing in a way that brings economic benefit to the area with the least environmental impact possible,” MacDonald said. “We are trying to stay low visibility, yet expand to meet the increasing load of tourism that comes to the Sierra Hot Springs.”

Until the development plans become solidified, MacDonald is keeping things running, investing as much as possible into the hot springs and taking care of the residents that work and live at the hot springs as well.

“We have quite a few resident artists, and they display their art in the Main Lodge and at the Globe Hotel in Sierraville, about a half-mile down the road. One of our artists is named Natasha Stanton, who displays many of her paintings here in the Lodge. Stanton actually has gallery showings now, and her artistic career started here at the hot springs. We like being an artistic community, and many of our residents and guests find that artistic inspiration here,” she continued.

With wellness retreats, spa treatments, massage therapy, and the natural hot springs themselves, there is a lot for visitors to do indoors and out in Sierra Valley.

“I think it’s a beautiful, relaxing setting,” MacDonald said. “The land has its own ‘vibe’, and it is home to us here at Sierra Hot Springs. We try to pass the atmosphere onto our guests, and many of them comment that it feels like a home away from home here.”