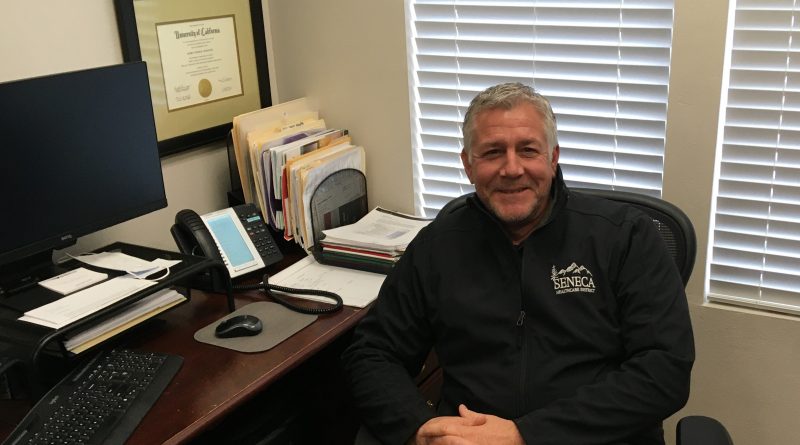 Shawn McKenzie, CEO of the Seneca Healthcare District, will be very busy now that the new Seneca hospital has been approved to proceed. A vast majority of Lake Almanor Basin residents have favored McKenzie and his staff with what he calls a “Gift of Trust” to bring about better healthcare and community involvement. He said “This is my community and I’m going to do my very best to keep that trust." Photo by Gregg Scott
News
December 13, 2022December 19, 2022 Editor

As Almanor Basin residents approached the Thanksgiving and Christmas season they have provided a new and personal subject to give thanks and be merry about.  Their overwhelming vote on the November 8 election ballot to approve the funding for a new Seneca hospital facility has been a continuing conversation of progress and hope in the community. Now that the election results are certified, the work and challenges for the hospital administration and staff will kick into high gear.

Meeting today with Shawn McKenzie, CEO of Seneca Healthcare District, he laid out a game plan that has been well over a year in the planning.  One of things that McKenzie stressed was the gratitude the entire Seneca administration and staff has for the “gift of Trust” the community has shown by their vote to allow the hospital district build a new medical facility to serve the Basin residents. With a lot of the pre-planning that has been done. the time line already  has  been shortened. The land has been purchased, much of the property due diligence has been completed and pre-design options are ready.  Contracts have been established with Boldt Construction Company and HGA Architects & Engineers to begin the final plans for the medical center. For time and efficiency’s sake the companies will be using ‘Industrial Construction’ techniques on part of the building. Site work, underground utilities and the superstructure of the facility will be pretty much as usual, but parts of the building can be constructed off-site during the same time frame as the site work and then moved into location upon completion of the site work. This should reduce the build time substantially.

The next (current) step is to confirm the financing of the project with the United States Department of Agriculture, Office of Rural Development, which will be the primary lending source. Once validation of the funding is received. the process can begin. The projected plan right now is that the initial harvesting/ground work can began in late spring/early summer of 2023 with a hopeful completion and patient acceptance in the fall of 2025.

Of course, the conversations prior to the Measure B vote, and now, always seem to come around to the positive impact this new facility will have on the Almanor Basin. An obvious response would be the opportunity to have improved healthcare for the community. McKenzie noted that several studies have indicated that healthcare providers prefer accepting positions at newer, state-of-the-art facilities, than older hospitals. That would mean that recruitment would be easier and more long-term providers would come to our community.  The hospital is already developing a new, more efficient, electronic patient record system that will increase quicker patient reviews and allow providers with additional patient care time. Care staff is also being given additional training in more specialized areas in anticipation of the completion of the new facility. There are several community groups that are working on behalf of the hospital and any donations to help fund the project will be greatly appreciated.