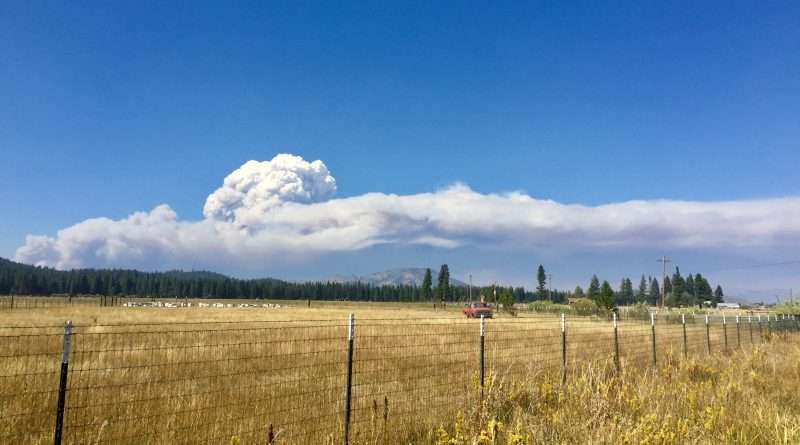 The Dixie Fire looks menacing from wherever you are including this view from Sattley in Sierra County. Photo by Roni Java
News
September 1, 2021September 2, 2021 Editor

Firefighters are seeing mixed success on the south end of the fire.  Grizzly Ridge is still holding which is great news for residents of the Highway 70 corridor.  Crews will continue working today to tie that fire line into the northwest corner of Lake Davis.  It will still take several days of mop-up to completely secure that line.

Crews managed to slow the northeasterly spread of the fire significantly yesterday.  But they were not able to stop it completely.  The fire moved about two miles which is far less than the day before.  Most of the fire held up along the 28N01 road as planned, but there was a slop-over that appears to be about 1,000 acres in size.  Firefighters are now backing off of plans to hold the fire along Squaw Queen Creek and are now looking at Last Chance Creek further to the east.

The fire has moved out of the heavy timber fuels and into more open pine and sage fuels.  With just a little bit of wind fires can move very rapidly through this type of vegetation but the amount of spotting should be less than in heavy timber and fire line construction is much easier.

The wind direction should tilt a little more to the west today.  This will take Milford out of the direct line of fire spread.  It is looking more likely that the Dixie Fire will eventually merge with the recent Beckwourth Complex burn scar.

The goal for firefighters now is to keep the fire off of the escarpment above Highway 395, and keep it from spreading south of Lake Davis.

Another big challenge facing fire crews is cooling down and securing the southern edge of the fire.  There is unsecured, or barely secured, hot fire line running from Grizzly Ridge to Squaw Valley Peak, a distance of about 15 air miles.  Currently, and for the next several days, the wind will blow parallel to that fire line moderating the threat level.  But if the winds shift to the north or northwest, which would happen with a frontal passage, that entire fire front could begin spreading south toward Portola and Beckwourth.  Fortunately there are no north winds in the forecast so firefighters have several days to address this problem.

Conditions have not changed much on the north end of the fire.  Heavy timber fuels continue to burn actively.  Crews continue to construct line in the northwest corner where spread has been minimal, but based on the very heavy use of air tankers yesterday it appears that crews are challenged keeping this part of the fire in check.  They are managing to hold it in check and at the same time are very busy doing structure protection in the Old Station area.

The story remains the same on the northwest corner of the fire where the winds are adding to the challenge firefighters face.  Crews continue to deal with numerous spot fires.  It looks like the fire may have crossed firefighters’ contingency line along the 10 Road, but so far they have held the fire south and east of Highway 44.  The highway is once again open between Old Station on Highway 36,

Light winds along with a moderate increase in relative humidity should moderate fire behavior this morning.  Southwest winds will increase to 10 to 16 mph with gusts up to 25 mph this afternoon.  Fire spread and spotting distances will be less than the past two days, but very active fire behavior is still likely.

The Dixie Fire has grown to 844,081 acres.  That is an increase of 36,685 acres since yesterday morning.  Containment has increased to 52 percent.  The projected date of full containment has changed from September 30 to “unknown.”