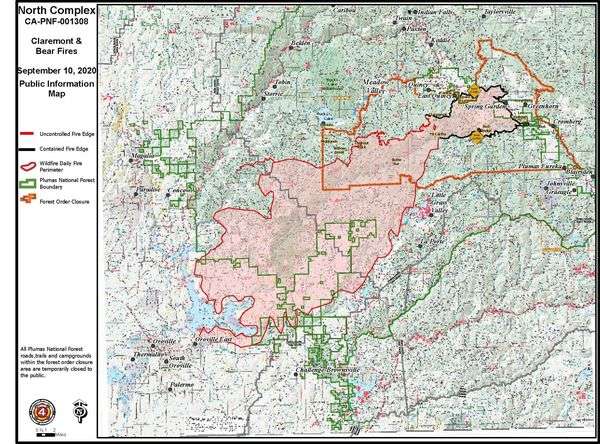 7:40 p.m. update: The North Complex Fire is now divided into three zones with the Forest Service managing the north and south zones (the original Claremont and Bear fires plus the expansion that is on the Plumas National Forest) and the west zone, which will be managed by Cal Fire and comprises the area that includes the area toward Lake Oroville. The entire North Complex is 247,538 acres and 23 percent contained. The west zone is at 65,295 acres and 0 percent contained.

There was good news for Bucks Lake residents and those who have cabins at Little Grass Valley Reservoir. During tonight’s briefing it was reported that all are safe and there is no threat to them. There is also a hand line and dozer line around La Porte.

The fire continues to remain in its footprint from Lee Summit, down the Highway 70 corridor, around East Quincy to Quincy and Claremont.

Crews will go direct on the remainder of the fire where possible, but also has a plan that could entail as many as seven to 10 days of under burning to tie the fire into Highway 70 and other roadways to provide containment.

1 p.m. update: The portion of the North Complex Fire that raged into Butte County is now being called the North Complex West Zone. The Butte County Sheriff is reporting that there are 3 dead, 12 missing, 100 who had to be rescued and several citizens injured, including some who were critically burned. It is 0 percent contained.

The devastation wrought by the North Complex Fire — specifically the Bear that exploded to more than 200,000 acres in a 24-hour-period from Sept. 8 into Sept. 9 — is leaving a path of death, injuries, property destruction and uprooted lives. The fire is 252,163 acres and 24 percent contained. Last night it was reported that thus far three individuals have died in the Bear Fire, 2,000 structures have been destroyed and 20,000 Butte County residents are under some type of evacuation order or warning. All numbers are preliminary, as assessments continue.

That’s just Butte County. In Plumas, Bucks Lake and La Porte residents are evacuated while advisories remain in effect for Meadow Valley and part of the Highway 70 corridor. For the surrounding areas, and into the Bay Area it has turned the skies apocalyptic.

As has been the case from the start of the fire, resources are stretched very thin. A plea was made for all individuals who are ordered to evacuate to comply because every engine, truck and piece of heavy equipment is needed to fight the fire rather than rescue people who have refused to evacuate.

Butte County Sheriff Kory Honea said every effort was made to contact individuals — Code Red alerts, social media, traditional media — but it’s never possible to achieve 100 percent saturation, particularly in rural areas. Many of the orders came as the fire was bearing down in the late night and early morning hours. He reported three deaths — two at one location and one at another — but would divulge no further details until positive identifications and notifications made.

The fire is now under the unified command of Cal Fire and the Forest Service.

The fire has burned down to Lake Oroville and firefighters are using it as a natural break. It is also burning in the scar left by the 2018 Camp Fire, which destroyed Paradise, so there is less fuel to burn. Winds are expected to change direction today so the fire could burn back onto itself; however, the swath that originally broke from the Bear Fire is considerably narrower than what it has grown into. The path back could wreak more destruction.

Plumas County residents who have shelter needs due to an evacuation are asked to contact Plumas County Social Services at 530-283-6350. Due to the small amount of individuals who have expressed a need  for shelter, the county will be handling those requests as they come in for now, but will continually reassess.

Attached is the latest evacuation information from the Plumas County Sheriff. The Highway 70 corridor is an advisory only at this time.

While the focus has been on the Bear portion of the North Complex, the Claremont Fire weathered the winds well and is remaining in its footprint.