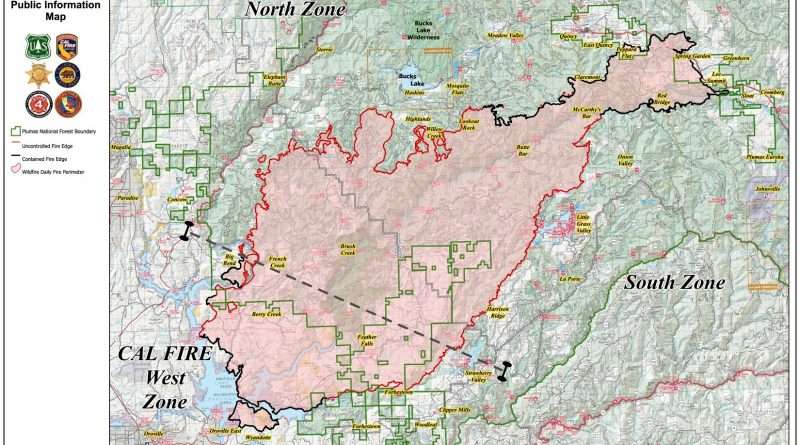 7:30 p.m. UPDATE: The predicted winds are making their appearance and firefighters are keeping a close watch on the Bucks/Meadow Valley areas. Due to the scarcity of resources, firefighters will have to abandon protecting the perimeter if there are too many spots, and move to structure protection. Residents of those areas are reminded that they are under mandatory evacuation orders; this includes Tollgate. Winds are predicted to be strongest through noon tomorrow.

As for other areas of the fires, Fire Operations Section Chief Jake Cagle said that despite rumors, the fire has not crossed La Porte Road as of this evening. Also, a fire in the Concow area was determined to not be related to the North Complex Fire.

9:30 a.m. UPDATE: During this morning’s briefing, Jake Cagle, the fire operations section chief, said that the mandatory evacuation for Meadow Valley has been ordered due to the threat of this afternoon’s winds. He said that structures aren’t under immediate threat, but could be if winds surface as predicted. If that occurs, all resources will be diverted to structure protection, as opposed to working the perimeter of the fire due to a scarcity of resources.

Cagle reminded his audience that the Forest Service is responsible for fighting 198,000 of the 270,00-plus acre North Complex Fire, with 1,400 personnel (that is less than half of the 3,100-plus personnel assigned to the entire complex). The priorities as of now are Meadow Valley, Tollgate, Haskins and Bucks. He said that firefighters are working beyond their 16-hour shifts to fight this fire.

9:10 a.m. UPDATE: The Plumas County Sheriff’s Office has issued a mandatory evacuation this morning, Sept. 17,  for Meadow Valley due to the fire. This includes all areas between Big Creek/Bucks Lake Road intersection east to Snake Lake Road.

An evacuation center is being set up at Springs of Hope Church at 59 Bell Lane in Quincy.

Original Story: One month ago today on Aug. 17 the Claremont and Bear Fires broke out following lightning strikes. It’s doubtful anyone could have envisioned that they would merge and explode to become the North Complex Fire — the sixth largest fire in recent state history. And there’s no sign of waning. With a Red Flag Warning in place from today through early Saturday morning, fire officials are worried about the communities of Meadow Valley, La Porte, and portions of the Feather River Canyon. Evacuations remain in effect for La Porte, and advisories are in place for Meadow Valley and the Canyon west of Belden.

There are more than 3,100 personnel assigned to the fire, but that remains a fraction of what would be working a fire of this size in a typical year. But this is far from a typical year. Resources are spread across the West as unprecedented fires have ravaged entire communities not only in California, but in Oregon and Washington.

As of this morning the fire is reported to be 280,755 acres and 36 percent contained. The death toll has increased to 15 and the daily count of damaged and destroyed structures continues to rise; the latest confirmed number is 1,142. (All of the deaths and all but one of the structures is in the West Zone of the fire that erupted Sept. 8 when the Bear Fire raced to Lake Oroville.)

Another Red Flag Warning is going into effect from 1 p.m. today to 2 a.m. Saturday. Winds are anticipated to increase across the region (with gusts up to 35 mph), and coupled with the dry conditions will result in critical fire weather. That’s not good news as the fire continues to be active in several areas.

In the South Zone, the Forest Service is reporting this morning that due to increased humidity and lower temperatures, firefighters continued to make good progress gaining containment from Sly Creek Reservoir to Little Grass Valley.

However, the fire remained active in the steep and rugged terrain of Onion Valley. Crews will continue to construct indirect hand line along Fingerboard Ridge, a north/south ridgeline west of LaPorte Road. Containment lines along the northeast portion of the fire continue to hold. Last night some mapping seemed to indicate that the fire had jumped La Porte Road, but the Forest Service said that is not the case.

Overnight in the North Zone, firefighters focused on containing spot fires, the largest of which is now approximately 200 acres on the northwest side of Red Mountain. Firefighters made good progress, and this area will continue to be the priority for resources today. Crews are working hard to contain the spots using existing roads, while also preparing indirect containment lines west to Oro-Quincy Highway.

In the western portion of the fire, crews held the fire within containment lines and plan to continue preparing Oro-Quincy Highway from the Four Trees area to Big Bend, working west to the Camp Fire burn scar. The West Zone can be defined by drawing a straight line from Big Bend (northwest portion of the fire) directly southeast to the Sly Creek Reservoir. For details on that portion of the fire go to  CAL FIRE Team 4 updates.

The Plumas National Forest and all other California national forests will continue to be temporarily closed. Pacific Southwest Regional Forester Randy Moore based said that based on forecasted winds and the potential for new fire starts and spreading of the existing fires, he signed a new closure order to extend to Sept. 21, but the situation will continually be reassessed.

Air quality will remain unhealthy throughout the area. 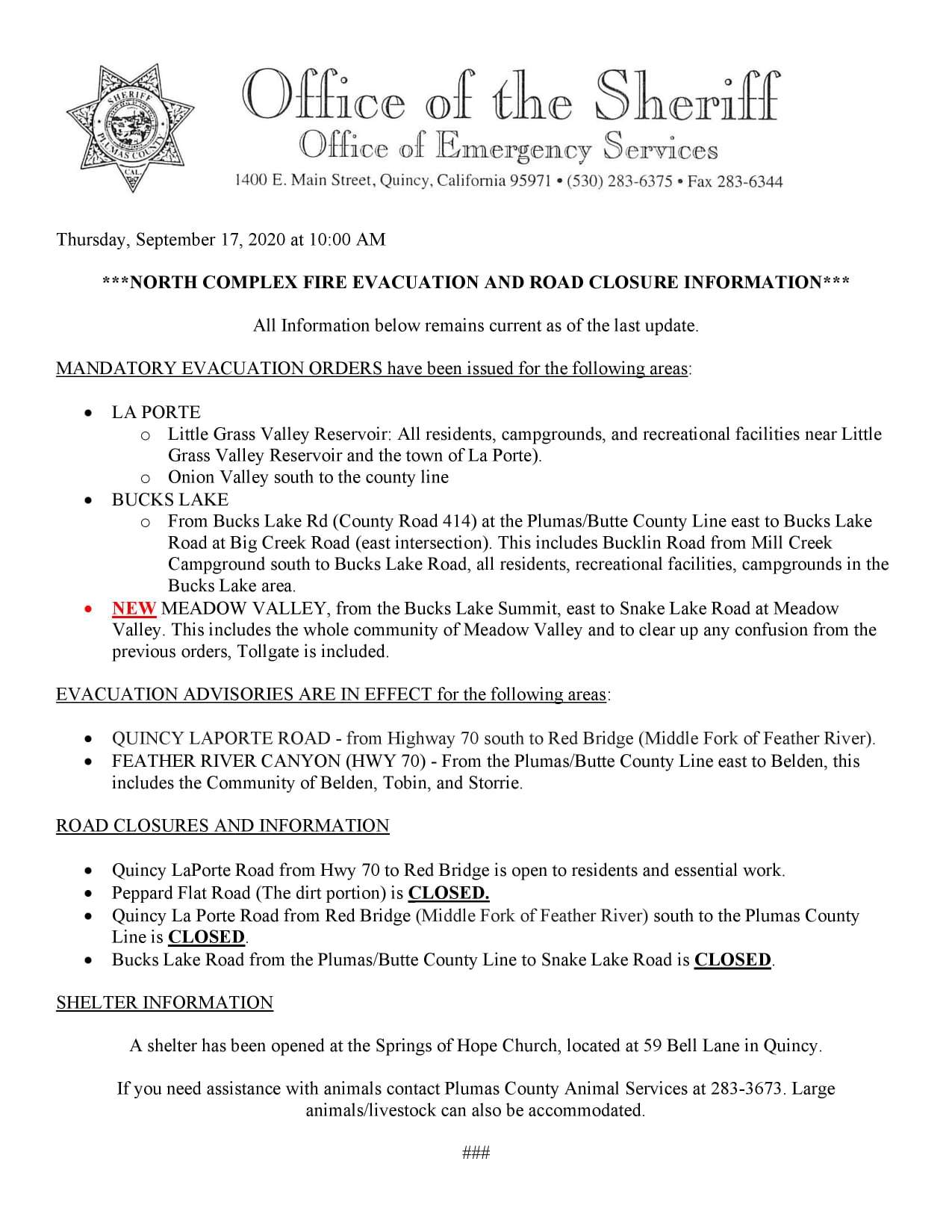