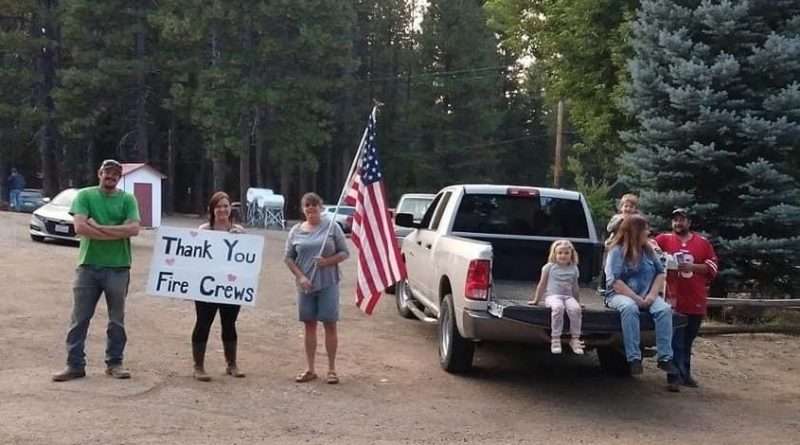 As firefighters work to contain the remaining hot spots on the fire, PG&E is contemplating another public safety power shutoff this weekend that will affect many residents already impacted by the North Complex Fire.

The fire which began Aug. 17, is now ranked fifth in California as being the the deadliest fire in modern history; fifth for being the largest fire, and sixth for the being the most destructive. Area residents have endured air quality that has ranked consistently as the worst or near the worst in the entire nation for weeks and several communities have been evacuated and many residents are still unable to return to their homes.

Despite all of that, last night residents turned out in Meadow Valley and Quincy to line the main streets and thank firefighters and support staff for their service. The individuals on the ground have gone beyond the norm during this historic fire season and their efforts are appreciated. For their part, firefighters lit up the night sky with their lights as they proceeded through the communities.

The fire remains 78 percent contained as of this morning, with 304,492 acres burned. The damaged and destroyed structure count has risen again to 2,360 (all but one property in the west zone). The death toll remains at 15.

According to this morning’s briefing, on the south zone crews patrolled containment lines around Quartz Hill and Onion Valley looking for areas of heat and ensuring that the line held. Today, firefighters will continue to look for opportunities to reinforce containment lines and monitor for any spot fires. All other containment lines within the zone held.

While firing operations along containment lines in the north zone have been completed, crews are still fighting spot fires. One spot fire late yesterday was contained at almost 20 acres. Resources will continue to reinforce the containment line where possible and patrol for spot fires.

The weather forecast is calling for a change in wind direction and speed. This change in winds will test the recently completed containment lines as there are islands of unburned fuels continuing to catch fire and throw embers across the lines, creating spot fires. Firefighters will be focused on catching and containing these spot fires before they have the chance to become established.

For that reason, the Plumas County Sheriff’s Office issued a statement indicating that La Porte and Bucks Lake area residents remain under mandatory evacuation until it is deemed safe to return.