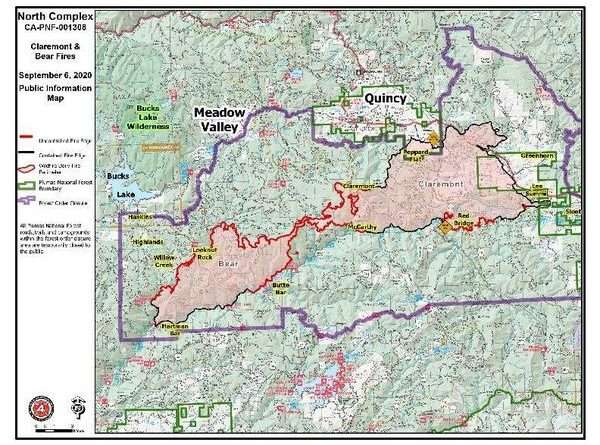 8 p.m. UPDATE: The perimeter  of the fire from Red Bridge to the Highway 70 corridor to Claremont is holding well with no issues. At the northwest portion of the Bear Fire, conditions have permitted firefighters to try to attack the fire directly rather than using strategic firing. Due to the Red Flag warning that goes into effect tomorrow night, firing options may be suspended until Thursday. Plumas County residents are under a power safety shutoff warning that could go into effect tomorrow night and last until sometime on Wednesday. The fire is holding well along the Middle Fork of the Feather River. Crews continue to work the south side of the fire where the Claremont and Bear have merged.

A structure protection plan remains in place for Bucks Lake, Haskins and the Highlands.

Helicopters were able to work the fire today — making water drops, flying reconnaissance and ferrying crews and supplies. There are 10 helicopters assigned to the fire, divided between Gansner in Quincy, Nervino in Beckwourth and Bucks Lake. 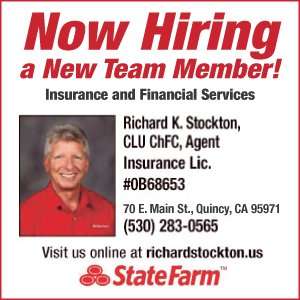 Night crews worked on spot fires last night on the north side of the fire between Bottle Springs and Lookout Rocks, after yesterday’s warm temperatures and afternoon sunshine increased fire activity. Crews will continue to address the spots today. The two largest spots were 10 acres and 40 acres, but crews worked quickly to address them. The weather today is forecast to be similar to yesterday, with the potential for increased fire activity this afternoon.

Additional crews will be on the south side of the fire today where it is backing down toward the Middle Fork of the Feather River. Fire has not crossed the river, but three crews are in place to monitor movement and respond where needed. During this morning’s briefing, it was mentioned that although the fire isn’t expected to cross the Middle Fork today, modeling suggests that it could in the future. There is concern about a Red Flag Warning with northeast winds forecast for Monday night into Tuesday.

Portions of Bucks Lake remain under advisory. The Forest Service will maintain contact the Plumas County Sheriff’s Office and the situation will be evaluated depending on the fire’s behavior.

Original story: Bucks Lake residents lined the roadway last night to thank firefighters as they came off the day shift. The crews providing structure protection and fighting the fire directly have been a welcome sight for the community that remains under an evacuation advisory.

During last night’s briefing, incident command personnel expressed optimism that Bucks Lake and the surrounding areas of Haskins Valley, Tollgate and Meadow Valley are safe as containment lines grow, but structure protection will remain in place in the event the fire were to spot dramatically.

The communities of Greenhorn, Spring Garden, Cromberg, Sloat and the Highway 70 corridor are likewise considered safe and all advisories have been removed for those residents.

The Bucks Lake area is part of the Bear Fire, while the latter communities are part of the Claremont, but as of yesterday when the two fires merged, there will no longer be separate acreage or briefing numbers; they will be treated as one entity.

The North Complex is 37,261 acres and 42 percent contained. There are 1,260 personnel working the complex, including 60 Canadian firefighters who have been mopping up Indian Valley’s Copper and Iron fires, but are moving today to work the south edge of the fire where the Bear and Claremont sides will meet; that has already happened to the north.

Yesterday’s winds helped clear the air for a time in the Quincy area, but prevented crews from completing all of the tactical firing that they had hoped to accomplish. The firing that was performed spewed more smoke into the area. During the briefing, area residents were told that they would see smoke, but not to be alarmed. There is fire burning within the containment lines which produces smoke, and firing operations that will ultimately contain the fire, also produce smoke.

Quincy suspect in mail theft; arrested in Sacramento on variety of charges

Jessica Nally, the Quincy woman wanted in connection with mail theft from Quincy Post Office, has been arrested in…

Animal Tales: A year for reflection; we could use your help

Hello  Friends and Supporters, This has been a year for reflection. In the beginning of 2021 Friends lost their lease… 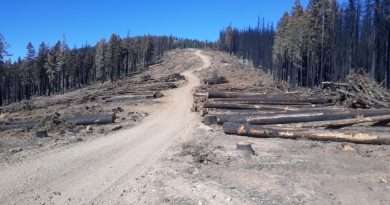 By Ken Donnell Plumas News contributor   For the past month, I have been making multiple trips to fire lookouts…