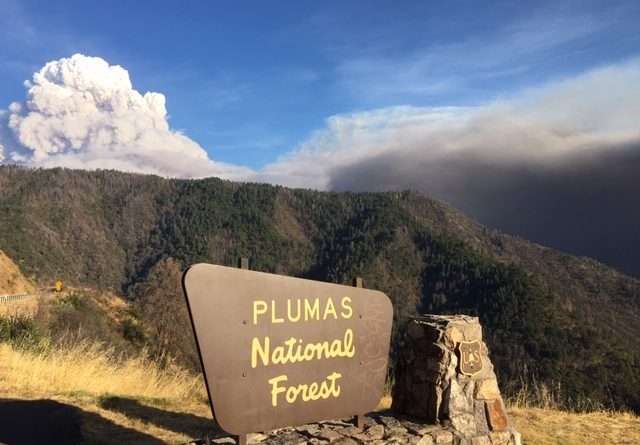 This 2020 file photo serves as a reminder of the need to be extra vigilant this fire season and why new forest restrictions go into effect July 1. Photo by Kevin Trutna
News
September 9, 2020September 10, 2020 Editor

UPDATE 7 p.m.: In a briefing this evening with representatives from the Forest Service, Cal Fire and Butte County via Facebook, it was announced that thus far three individuals have died in the Bear Fire, 2,000 structures have been destroyed and 20,000 Butte County residents under some type of evacuation order or warning. In less than 24 hours, the lives of thousands changed when the Bear Fire, which had been percolating in Plumas County since Aug. 17, roared into Butte County down to the shores of Lake Oroville.

It was made clear during the briefing that all numbers — including 251,000 acres burned — are all very preliminary as crews continue to assess the damage and continue to fight the fire. As has been the case from the start of the fire, resources are stretched very thin. A plea was made for all individuals who are ordered to evacuate to comply because every engine, truck and piece of heavy equipment is needed to fight the fire and not rescue people who have refused to evacuate.

Butte County Sheriff Kory Honea said every effort was made to contact individuals — Code Red alerts, social media, traditional media — but it’s never possible to achieve 100 percent saturation, particularly in rural areas. Many of the orders came as the fire was bearing down in the late night and early morning hours. He reported three deaths — two at one location and one at another — but would divulge no further details until positive identifications and notifications made.

The fire is now under the unified command of Cal Fire and the Forest Service.

UPDATE: 4 p.m.: During the latest briefing, the Forest Service outlined its plans to address the portion of the Bear Fire that blew up yesterday and advanced on Oroville. It is now estimated to be roughly 252,000 acres. It is known that multiple structures have been lost and people injured, but the Forest Service said the exact numbers are still being compiled. It’s hoped more information will be available at the evening briefing.

The fire has burned down to Lake Oroville and firefighters are using it as a natural break. It is also burning in the scar left by the 2018 Camp Fire, which destroyed Paradise, so there is less fuel to burn. If winds cooperate, the Forest Service in conjunction with Cal Fire hopes to stop the fire’s spread.

UPDATE: 3:40 p.m.: Plumas County residents who have shelter needs due to an evacuation are asked to contact Plumas County Social Services at 530-283-6350. Due to the small amount of individuals who have expressed a need  for shelter, the county will be handling those requests as they come in for now, but will continually reassess.

UPDATE: noon: Attached is the latest evacuation information from the Plumas County Sheriff. The Highway 70 corridor is an advisory only at this time.

UPDATE: 10:47 a.m.: According to Plumas County Sheriff Todd Johns, there is now a mandatory evacuation in place for all of the Bucks Lake area, including Bucks, Haskins, Highlands and Tollgate. There is an advisory in place for Meadow Valley.

An advisory is also in effect for the Highway 70 corridor from the Butte County line to Belden.  It’s being ordered due to erratic winds and it’s anticipated that the fire could push back into Plumas County.

UPDATE 10:17 a.m.: During this morning’s briefing, Operations Section Chief Jace Cagle described in more detail the spread of the Bear Fire last evening. He said overnight the fire could have grown as much 210,000 to 230,000 acres based on heat mapping. The new swath is approximately 25 miles by 30 miles. The fire reached Oroville East and also crossed Highway 70. The fire is still getting east winds, but they are supposed to shift to south west tomorrow.

The focus last night was “life safety” and he said there were too many communities evacuated to list, but residents should check regularly with their Sheriff’s Offices to determine their status. Manpower was stretched thin with the evacuations and communication remains difficult in the midst of the PG&E public safety power shutoff.

The wee bit of good news from last night is that the Claremont remained in its footprint from behind Quincy to Sloat and Cromberg.

Cagle said during the briefing that mandatory evacuations were in place for Bucks Lake, Haskins and the Highlands, and Plumas News is confirming with the Sheriff.

UPDATE 8:35 a.m.: According to the most recent information released by the Forest Service, the fire expanded by 80,000 acres outside of the original footprint in approximately the last 24 hours. However, the situation is rapidly evolving. The fire is now 150,000 acres and 38 percent contained, with multiple counties and jurisdictions involved. There are 1,411 personnel assigned to the fire.

The fire is threatening Oroville Dam and critical telecommunications equipment. Priorities continue to be life, property and critical infrastructure.

Original story: The North Complex Fire exploded yesterday morning at approximately 10 a.m.  driven by the predicted winds, forcing evacuations in not only Plumas County, but Butte and Yuba counties. The fire grew at the rate of 1,000 acres per half hour and raced 15 miles toward Lake Oroville,  with the sheriff’s of all three counties constantly updating and expanding evacuation orders. Butte County had every deputy on duty last night assisting with the evacuations that came rapidly.

According to the Oroville News Live website, buses and ambulances lined up to take burn victims from the Berry Creek area in Butte County to medical assistance. Some were reported to be suffering from burn injuries. The streets were reportedly  littered by fallen trees and burned cars, which had to be pushed out of the way so medical crews could respond. (Plumas News is working to confirm this information.)

This morning thousands of residents are evacuating the Lake Oroville area Wednesday morning, trying to get out of the way of the quickly advancing Bear Fire.

As of 4 a.m. immediate evacuation orders:

The Bear Fire, the portion of the North Complex that is causing the destruction, has been growing in Plumas County  since Aug. 17, when at first it was just a few acres. Now, it comprises the bulk of what is known as the North Complex. That fire, which was 51 percent contained yesterday and seemingly progressing daily, is now at 37 percent.

La Porte in Plumas County is evacuated and there is a host of areas in Butte and Yuba counties that have been impacted. Last night the Butte County Sheriff said its website was impacted and slowed drastically due to the number of people logging on to check the latest orders.

Now that the fire has spread off the Plumas National Forest and into Cal Fire jurisdiction, that entity will share management of the Bear moving forward.

The Red Flag Warning remains in effect until 5 p.m. today. 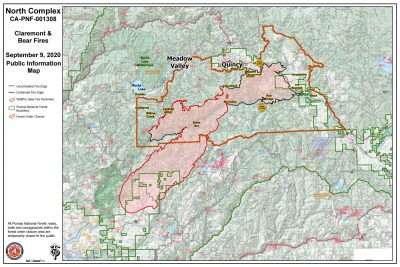