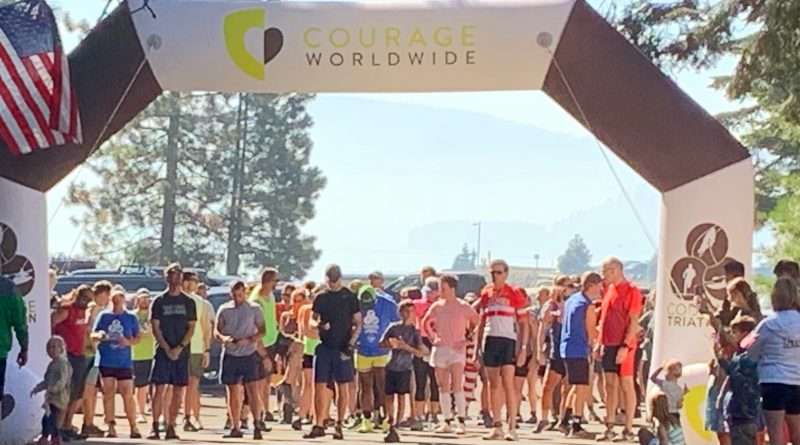 A perfect day was enjoyed by over 80 athletes who ran, biked and kayaked at the seventh Annual Courage Triathlon, a benefit to raise money to help sex-trafficked children. “Though a smaller turnout in years past due to the Dixie Fire, we decided to hold the event and we are so glad we did since all had a great time and we were able to raise $18,000,” says Dawn Herschberger, Ambassador for Courage Worldwide. All the money raised goes to the   care and rehabilitation of those that have been rescued.

The event opened with a prayer, the national anthem sung with the crowd waving their American flags, and a moment of silence was held to honor the 20th anniversary of 9/11. At 10 a.m. under the Courage Worldwide arch, the horn was blown and the runners began a hilly 2.9-mile course.  Once runners completed their run, bikers were off for 6.4-miles and then the race was in the hands of the kayakers who paddled 3.1-miles and then ran up the beach of Rec I to the finish line.

Winners in the men’s overall: Pierre Redmond of Genoa at 1:29:56; ladies’ overall winner was Lisa Williams, Chico, with a time of 1:48:04; and team winner, Keep It Movin’, Katherine Sansone, Randy McCrimmon and Mary Austin coming in at 1:49:34.

“Our goal is to raise money to aid sex trafficked children,” says CEO/Founder, Jenny Williamson. “I know this community has been through a lot and ‘showing up’ demonstrates their spirit, generosity and resiliency. We thank our hosts, Lake Almanor Country Club and all who participated, our volunteers and guest who joined the festivities.”

Exemplifying the spirit of the Courage Triathlon – by Susan Espana

“After cycling along with runners, Jo ran into me and needed an additional volunteer to man one of the road intersections to keep cyclists heading in the right direction. Nearing the end of the bike course, I was told by two riders that there was a boy who was dragging his bike after his rear tire blew out.  I started to backtrack to look for him. As I was riding, someone asked me if I was looking for a boy with a broken bike.  I said yes, and he said, “That’s me. A lady gave me her bike so I could finish the race.”  I rode on and found the woman carrying his bike.  I asked if she wanted me to call for a pickup, and she just said, “No, it’s fine.  I can do this.”  It was the boy’s first time to do the race and having done it many times, she wanted it to be a positive experience for him and give him a chance to finish, so she swapped bikes with him.

I kept her company as she carried the bike.

As we rounded a corner here comes the boy on the bike riding back toward us!  He hopped off and said, “I finished, now it’s your turn.” He gave her back her bike so that she could ride to the kayak handoff location.  The boy picked up his bike and started to carry it again, his eyes sparkling, talking about training for next year, the challenge of the hills, so happy and pleased that he was able to finish his leg of the race. The pickup arrived, he hopped and went to the finish line to cheer in the last member of his team.

Courage, compassion, taking care of one another, even though they were complete strangers, this is in the spirit of the Courage Triathlon.”