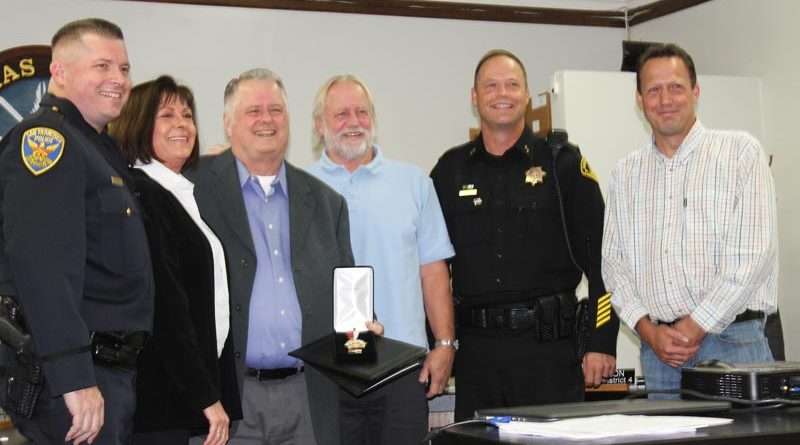 At 5 p.m. on Tuesday, Nov. 19, Nick Dawson turned in his badge and other items collected after working for the Plumas County Sheriff’s Office for the past 28 years.

The Board of Supervisors chambers was crowded as colleagues, friends and some family members gathered to wish Dawson well.

Sheriff’s Patrol Commander and future interim Sheriff Todd Johns presented Dawson with a plaque and words of distinction on his retirement.

“In recognition and grateful appreciation of your 28 years of devoted service and dedication to the Plumas County Sheriff’s Office and the citizen of Plumas County by distinguishing yourself through your selfless dedication to public safety,” Johns noted.

“Your professionalism, teamwork and demonstrated proficiency have directly contributed to the continuing success of the sheriff’s office and more recently the Office of Emergency Services.”

“Thank you for your many valuable contributions over the past 28 years, you will be greatly missed,” Johns said.

In addition, Johns said that Dawson is the type of officer that could work a 16-hour day or longer, go home, and be willing to go back to work if asked. “Nick is the type of employee you can count on no matter what,” Johns said.

Simpson said it was just recently that she found herself contacting Dawson late at night for information. She was surprised when he immediately responded to her.

“You’ve done an excellent job for our county,” Simpson added.

Dawson said that it takes a whole team effort working toward a common goal to be successful.

He added his special appreciation to Environmental Health Director Jerry Sipe who “helped me enormously on the paper side,” of his job with OES.