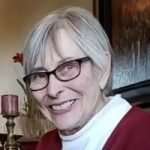 Shirley was born Nov. 20, 1933, in her family farmhouse in Wisner, Nebraska. In her lifetime, she attended a one-room schoolhouse, later taught there for a year. She went to the University of Nebraska for Nursing. She met her husband, Dr. Mark Whitney, while he was in Medical school. They had two children. She earned her private pilot’s license, together with her husband, and flew their family to many destinations.

Most of her life she lived in the mountains in Northern California (Quincy, then later Graeagle). She loved to paint, with both watercolor and acrylics. She loved needlework, crewel embroidery and counted cross-stitch. She raised German Shepherds, 28 puppies in three litters; hatched geese, ducks and chickens using a large countertop incubator. She was a 4-H leader, Cub Scouts and Brownie leader. She spent a lot of time exploring in the mountains with her children, finding artifacts from railroad, and mining settlement digs. She loved to host parties and had many friends. She was adventurous and fearless and lived her life to the fullest.

Shirley was preceded in death by her parents, Ewald and Alma (Eckert) Kuester; her ex-husband, Mark Whitney, MD; and her sister-in-law, Doris Kuester.