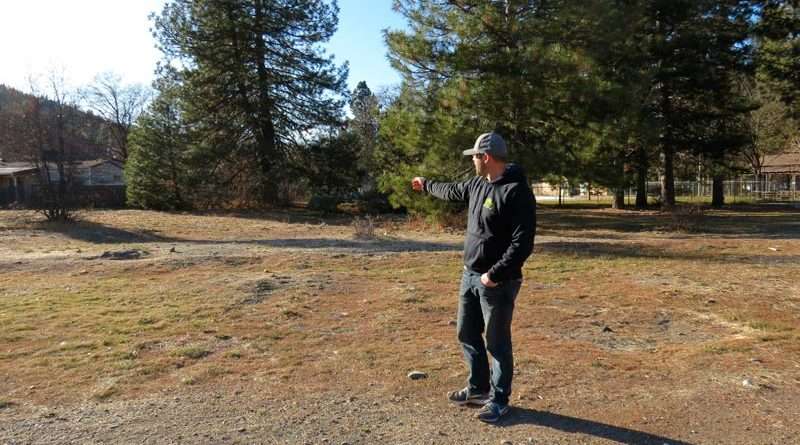 James Shipp, Central Plumas Recreation and Park District general manager, points out the approximate location of the proposed Plumas Charter School. The district is considering selling 1.5 acres of a 2.9-acre parcel to the school. Shipp said that power lines that run through the front portion of the property forces the school to be located deeper into the parcel. Photo by Debra Moore
News
December 4, 2019December 6, 2019 Debra Moore, Managing Editor

Public has the chance to weigh in

Should the recreation district in Quincy sell 1.5 acres of its land to Plumas Charter to build its new school?

That’s the question the public will have a chance to comment on during a special use permit hearing Wednesday, Dec. 11, at 10 a.m. at the Plumas County Planning Department.

The Central Plumas Recreation and Park District board of directors has been discussing the potential sale and is anxious to hear from the public before proceeding.

The land is located adjacent to its facilities in East Quincy and had been earmarked for future recreation district needs. The entire parcel is 2.9 acres and the district would be selling about half to the school.

James Shipp, the district’s general manager, has been working with Taletha Washburn, executive director of Plumas Charter, and the duo think that they have achieved a win-win situation for both entities.

The district would get an infusion of cash from the property’s sale as well as ongoing revenue from a usage fee, and the school would finally have a building site, as well as access to recreation.

The board discussed the details of the arrangement during its November meeting, but declined to vote on a letter of intent that was presented which laid out conditions for the sale.

Board member Jerry Sipe, who said he supports the concept, laid out a number of concerns before saying, “This is a complicated thing and I want to make sure that we’re methodical.”

“We will solidly give up the soccer fields,” Shipp said of the plan, referring to the idea that one day soccer fields could be built on the property.

The district currently has an arrangement with Feather River College to use its fields for youth soccer. The property adjacent to the recreation district had been earmarked to be used for soccer fields if the college ever decided to cancel or curtail access.

But the 2.9 acre parcel isn’t large enough to accommodate all of the fields needed for youth soccer, so other land would be needed. And that’s where the Kelsey Lane property, currently owned by Plumas Charter, could enter the equation.

Shipp proposed that the recreation district sell the 1.5-acre parcel, which fronts Highway 70/Main Street through East Quincy for $170,000. When asked if it that was the fair market value for the property, Shipp responded, “They (the charter school) have $170,000 left and that’s it,” which he said would be less than fair market value.

Shipp’s mention of having money “left” referred to the remainder of the $440,000 that Plumas Charter had earmarked for this phase of the project. The money had been spent on studies and costs related to the Kelsey Lane property, which Plumas Charter learned was too costly to build on — just as others before them had.

“I’ve driven by that property for 35 years and am always glad that I didn’t have anything to do with it,” director Scott Davis said.

Davis expressed the most concerns about the land sale and proposed relationship during the meeting.

“I don’t like the land use agreement with kids in the park,” Davis said. “And you’re talking about $170,000 is all they have and that’s not our problem. We don’t have to sell this property, but if we’re going to sell it, it has to be at full market value.”

While the property has been determined not to be an ideal building site, the pair said it could be used for a soccer field or a pump track for cyclists.

Davis said that he would prefer to sell the entire parcel to Plumas Charter and then they could build their own playground, which would alleviate his concerns about the public’s ability to access the grounds, since the recreation district is taxpayer funded.

In a document presented to the board, the school’s usage was estimated to be from the end of August to early June and would include morning recess, lunch access and afternoon physical education.

“My main issue is the charter school kids using the park as their every day playground,” he said, worrying about the impact that would have on the general public’s ability to access the park.

Shipp said that the recreation district couldn’t sell the entire parcel due to deed restrictions and access, but that he was sure the charter school wouldn’t use the playground exclusively and that some of their outdoor activities would occur elsewhere on the grounds.

The issue of student safety arose, since it is a public park that is open to everyone and it isn’t fenced as is the case with the other local public schools.

The point was made that the charter school currently uses Dame Shirley Plaza, which is not fenced and open to the public, and there haven’t been issues.

Director Sipe said that he is concerned about the safety of the students as they are housed now, since they are downtown adjacent to busy roads.

Shipp stressed that the one-time and ongoing revenues would allow the district to improve its facilities.

He also has a long-range vision that would include linking the charter school to Quincy High School and the adjacent Kelsey Lane property by developing the 99 acres over Cemetery Hill with bike paths and trails.

“This gives us an opportunity to service the community,” Shipp said. “How can we afford not to?”

Washburn told the board that the charter school had had its USDA loan for one-and-a-half years and she is anxious to build. “If we’re going to do it, it would be good to start in the spring,” she said. And there are still steps to be taken including an appraisal and lot line adjustment, which have their own timelines.

Those steps also come at additional costs, which the district proposed the charter school pay.

Additionally, the recreation district board asked Washburn for examples of other partnerships between recreation districts and schools. While it’s not unusual for schools to use public recreation facilities, the ongoing daily nature of the charter school and the rec district raises concerns for at least one board member.

“For me a straight sale is a clean deal,” Davis said, who doesn’t want to be “entangled in an MOU” with the school.

But he added that he realizes that Shipp is “very invested in this.”

Director Sipe said that the details of the MOU would be key to how the relationship works for the school and the community.

Washburn said that it could “potentially be a real healthy partnership” that could bring in additional government funds. “James (Shipp) and I get excited about the potential,” she said.

To assure Davis, she said, “Nothing is committed in stone. We can start with baby steps. We can define it however we want.”

But she reiterated that she doesn’t want to build a playground.

The public will have the opportunity to weigh in on this subject at the public hearing for the special use permit on Wednesday, Dec. 11, at 10 a.m., at the Planning Department’s meeting room on Main Street.