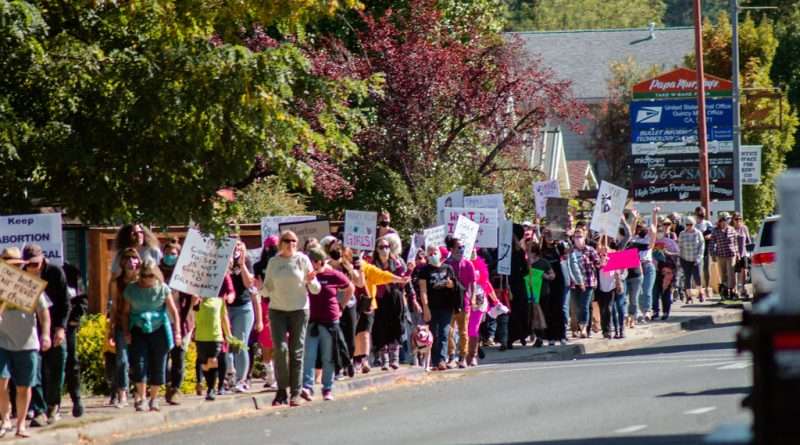 As soon as the U.S. Supreme Court let the Texas abortion ban at six weeks appeal not be heard and thereby letting the law to ban abortion after six weeks of pregnancy—the time a woman carrying a fetus usually becomes aware that she is pregnant—organizers on both the national and local levels across the country got into gear to protest the law.

Women and their families and supporters in Plumas County met in front of the courthouse in Quincy on Saturday, Oct. 2, to take part in the nation wide protest to make their voices heard.

The Texas law includes measures to punish the woman involved in the abortion, her doctor, plus anyone who may have helped her (such as an driver). It also rewards vigilantes who turn in their neighbors who may have either had one or helped someone have one for $10,000. To date it is the strictest and most far reaching ban and attempt to strike down the 1972 Roe vs. Wade case that held that a woman’s body and health decisions were to be made by her and her physician and no one else.

At least 200 people in downtown Quincy on Saturday showed up to support the 49 year old law that gave women autonomy over their own bodies. Their signs and speeches professed many related issues of women’s health.

Organizers Amy Napoleon and Amanda Maffei put together the local Plumas-based march and featured an array of speakers including young women who graduated from Plumas Charter School in 2021 such as TyAnna Farmer—who read her poetry and  Rosha Zolfaghari who read an essay she wrote about women in the Middle East and Afghanistan from a public health body autonomy perspective.

Sierra Blanton Rader and Kaline LeCoq sang “Rise Up” bringing tears to the eyes of some in the crowd.

Women and children made signs, and kids drew messages of love and respect in sidewalk chalk. Plumas County’s own witches dance troupe started off the event with a dance.

After the speakers were done, the assembled marched down Main Street  and made a giant rectangle back up Lawrence, turning around near the post office.

The event was attended by people of all ages, from littles wearing T-shirts that said “Girl Power” and “I’m a Feminist” to senior citizens. The march, organizers informed, was about solidarity.

While California’s electorate would make it impossible to pass a similar bill into law in California, women around the country and in Plumas were standing in support of Texas women.

The event was almost without incident. Towards 12:30 p.m. when the march was nearly over, an elderly gentleman wandered onto the courtyard steps to shake his cane at the marchers who were left. He shouted that his taxes had been raised under Biden.