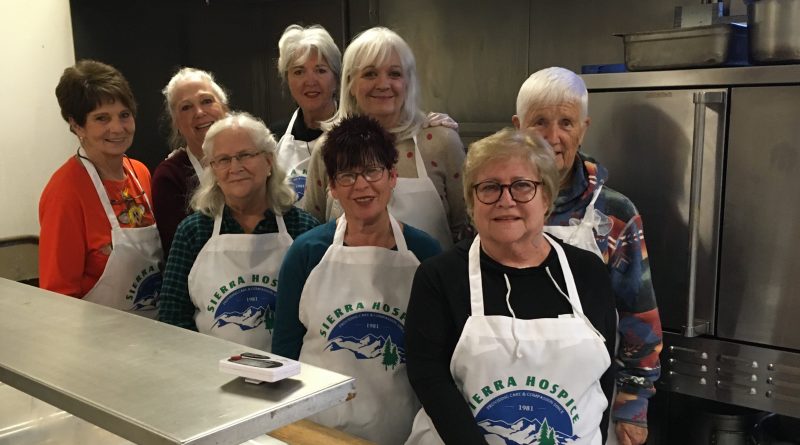 The ladies of Sierra Hospice gather together right before the five o’clock dinner hour. With smiles and graciousness, they are ready, willing and able to serve the line of diners waiting just a few feet away. Photo by Gregg Scott
News
November 18, 2022November 23, 2022 Editor

The Almanor Basin Food Bank’s first supper on Thursday, Nov. 17 at the Chester Memorial Hall, was a resounding success according to virtually all who attended.  When the doors opened it seemed that there might not be as many folks attending as were expected, but that changed quickly as the 5 o’clock hour neared.  Sierra Hospice was the evening’s sponsor and the volunteer ladies were ready to serve up the bountiful Thanksgiving Dinner that Chef Carol Franchetti and ger crew had cooked up for the event.

What better way to warm up for the holiday season that to sit down to turkey, mashed potatoes, dressing, gravy, green bean casserole, green salad and a hot from the oven biscuit?  Yes, yes! I know I forgot to mention the pumpkin pie, but I saved mine until last.  It must have been as good as folks were saying if only because about 140 dinners were served.

This is the only community supper scheduled for November, but December will have two.  Mark your calendars for December 8 and 22 to join the community for some fine food and warm conversations.