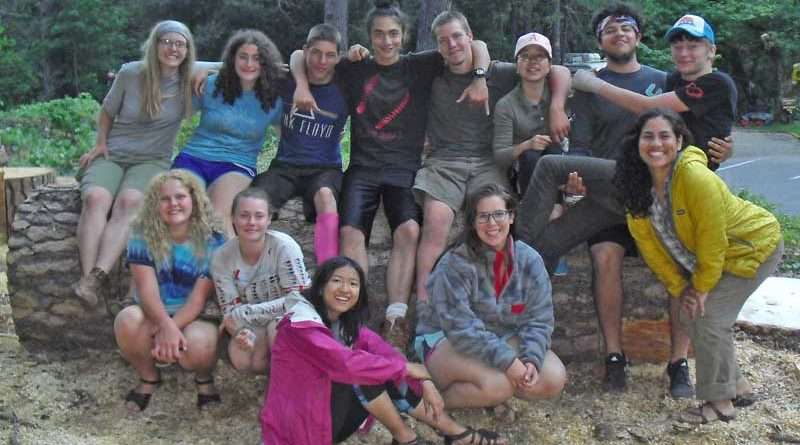 At the site of the old Taylorsville Elementary School, teens sit in the shade trying to escape the hot sun while they scrub hard hats they’ve worn for five weeks and hang camping gear they’ve washed on old monkey bars to dry.

A few tents are still up and other camping gear is strewn about the old asphalt playground as Sierra Institute’s newest acquisition up-cycles the old school property into something new — a headquarters for its summer program: Plumas Conservation Restoration Education in Watershed. P-Crew.

The program takes students from the Bay Area, many of whom have never experienced the great outdoors or considered possible jobs in the forest post graduation, and local Plumas and Butte county students on a five-week camp working on forest conservation and trail maintenance in Plumas and Lassen counties. This is the third summer of the program and this year 11 students from the two regions participated in the first session of the program.

All 11 students stayed the whole time and no one backed out — even as the program started during a record heat wave.

The second session started on July 18.

For some students it broadens their minds and their ideas of what the concept of conservation really is and what it entails beyond the obvious “environmentalism” they’ve heard about growing up in the Bay Area.

They did a variety of tasks, including demolishing old fencing that had been ripped away during spring flooding, installing deer guzzlers, making burn piles and identifying invasive species.

“This session of P-Crew was full of hard workers,” said Patty Llamas, one of the organizers and mentors of the session.

Students cleaning gear gave exhausted smiles, universally agreeing that they’d had fun despite all the hard work in the summer sun.

“I’d do it again,” said a girl from Oakland not quite ready to go home despite the five weeks away from home.

P-Crew will be seeking community members to volunteer for trail maintenance on the Pacific Crest Trail on Friday, Aug. 11.

For more information, call Ashley Bomar at the Sierra Institute at 284-1022.

“It’s a great opportunity to do trail maintenance and great conversation,” said Bomar.