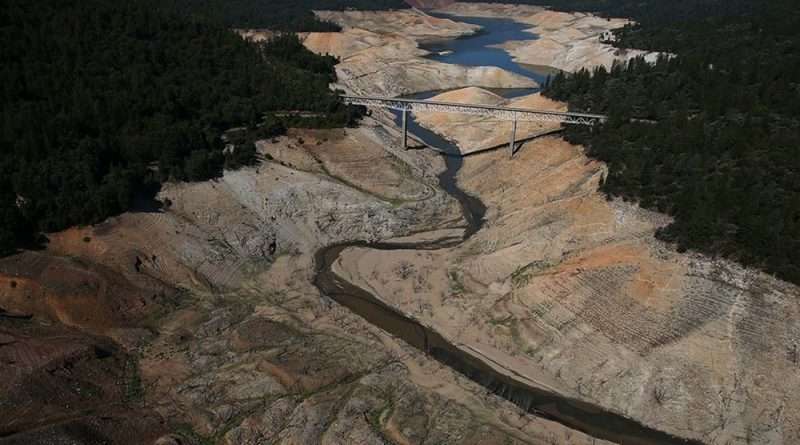 Despite a good start to the water year, levels at Lake Oroville remain well below historical averages. Officials say it could take several wet winters to make up the deficit. File photo
News
June 16, 2016November 29, 2016 Staff

California’s snowpack is both deeper and wetter than normal, according to a snow survey conducted Wednesday, Dec. 30, but water officials are not counting their snowflakes before they fall.

Officials warn that the remainder of the winter will largely determine whether California’s drought continues for a fifth year.

Mark Cowin, director of the Department of Water Resources, said the heavy snowfall so far during water year 2016 “has been a reasonable start, but another three or four months of surveys will indicate whether the snowpack’s runoff will be sufficient to replenish California’s reservoirs by this summer.”

Despite the promising snowpack, major water reservoirs are storing far less water this year than their late-December historical averages.

One year ago, Oroville’s numbers were 1.3 million acre-feet, which was 62 percent of its Dec. 30 average.

Frank Gehrke, chief of the California Cooperative Snow Surveys Program, said more than four years of drought have left a water deficit around the state that may be difficult to overcome in just one winter season.

“Clearly, this is much better than it was last year at this time, but we haven’t had the full effect of the El Niño yet,” Gehrke said. “If we believe the forecasts, then El Niño is supposed to kick in as we move through the rest of the winter. That will be critical when it comes to looking at reservoir storage.”

Last week’s manual survey found a snow depth of 54.7 inches — 16 inches more than the average depth measured there since 1965 — and 16.3 inches of water content, 136 percent of the Jan. 1 average for that site.

More telling than a survey at a single location, however, are electronic readings from 99 stations scattered throughout the Sierra Nevada.

Measurements indicate the water content of the northern Sierra snowpack is 11 inches, 108 percent of the multi-decade average for the date.

The central and southern Sierra readings were 12.1 inches (116 percent of average) and 7.0 inches (86 percent) respectively.

Statewide, the snowpack held 10.2 inches of water equivalent, or 105 percent of the Dec. 30 average.

Each water year begins Oct. 1 and ends the following Sept. 30. DWR conducts snow surveys in the Sierra Nevada each winter — near the first of January, February, March, April and May — near Echo Summit (elevation 6,800 feet) off Highway 50 near Sierra-at-Tahoe Road.