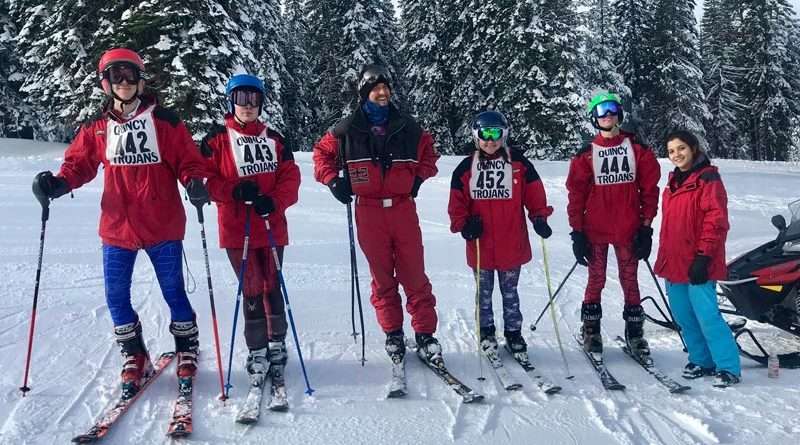 The team’s sole female racer, sophomore Sabina Winter, won first place out of 27 skiers in the girls’ varsity division, with a combined time of 59.72 seconds in two runs on the competition slope. This is Winter’s second year racing on the team and the first time she has come out ahead of her close competitors from Chico High School. They followed just a second behind.

QHS other team skiers, junior James White and sophomore Payton Peters, both skied clean first runs. White was unable to practice before opening races, but still managed to complete his first run in 16th place with a time of 31.61. Peters, who has only skied a couple of times, had a time of 48.73 seconds on his first-ever race.

Both boys ran into trouble on their second runs with falls requiring them to hike back up the hill to ski thru missed gates. “Their fortitude and willingness to finish the race rather than be disqualified for missing a gate drew loud cheers from the crowd of spectators watching from the bottom of the course,” said parent and photographer Suzi Brakken. White and Peters finished in 24th and 25th places, respectively.

The team started practice in November with Max Egloff returning for his second year coaching the Quincy Snow Trojans. The racers have combined gym workouts, yoga and day and night practices at Boreal to prepare for the season.

Joining the team in practices is Maria Balan, a QHS foreign exchange student from San Paulo, Brazil. Balan has enjoyed learning to ski but, is not competing in races since she will be returning to Brazil at the end of the month.

The Trojans have five Tahoe area races remaining in the California-Nevada Ski and Snowboard Federation’s Central 1 Division. The next race is a slalom race at Boreal on Monday, Jan. 21 (Martin Luther King Junior Day).