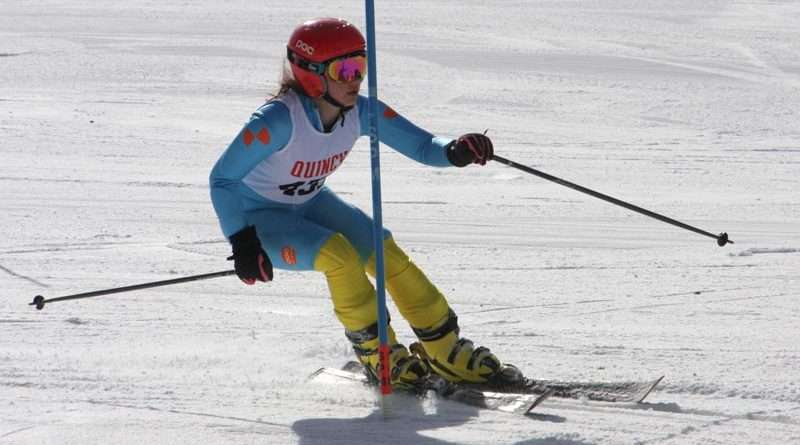 Emma Leff negotiates a turn during a successful run down the hill Feb. 14 at Boreal in her first year racing. Photo by Suzi Brakken

The result of the day’s races was the entire QHS ski team will move on and compete in the state championships. Awards followed the league’s final slalom race on the hill.

QHS junior Sabina Winter placed fourth in the girls race that day. Winter’s combined giant slalom and slalom race times from the league’s eight races landed her in fourth place overall out of 26 girls. Winter had twice won second place in slalom and third place in giant slalom during the season.

Senior Sam Lawson also placed fourth overall in the league out of 33 boy racers after finishing his last slalom race in fifth place.

“Throughout the season he had taken third place in both a slalom and giant slalom race,” said QHS ski photographer Suzi Brakken.” Winter and Lawson received patches and accolades during an awards ceremony held for all top 10 league finishers following a group barbecue with racers from six different schools.”

Two other QHS racers had clean runs in their final league race Feb. 14. Junior Emma Leff, who is in her first year of racing, took 14th place in the girl’s race, and earned 17th overall.

Sophomore David Leonhardt, who was new to slalom racing this year, came in 20th place competing in the boy’s Feb. 14th race. He placed 28th overall.

Quincy High’s other ski racers, senior James White (who placed 17th overall) and sophomore Haley Perkins (who placed 26th overall) will join their teammates for the state championship races of the California-Nevada Interscholastic Ski and Snowboard Federation on Monday and Tuesday, March 2 and 3, on the Northstar runs at Tahoe.

The Quincy ski team will compete against some 80 skiers from 30 high schools across the state.

The team is continuing to practice for state finals with coaches Max Egloff and Elliott Smart. “Even through this winter’s lack of snowflakes (so far!), our team has had an amazing year of skiing!” said Egloff. “Our veteran skiers stepped up their skills and leadership by taking an awesome group of beginner skiers and turned them into ski racers, quickly! I couldn’t be more impressed and proud of the team this year.”