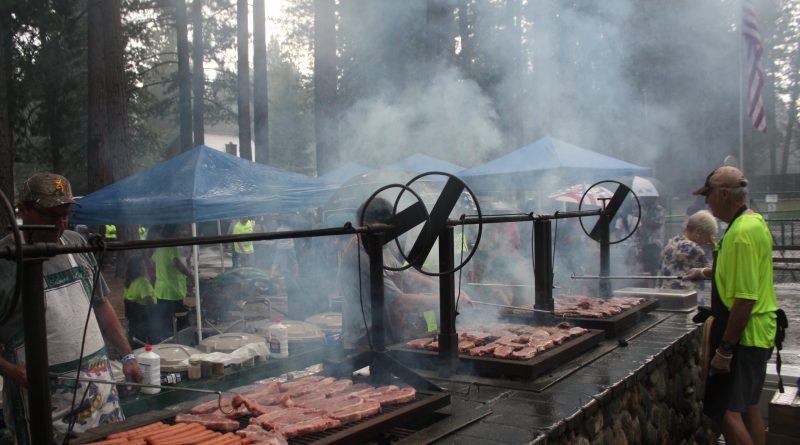 With steaks that look like this and an accompanying meal fit for a king, the rain seemed to be just another short annoyance for most of the folks at the Almanor Fishing Association's BBQ.  Good food and hundreds of prizes to win or buy, that sounds like a lot of fun. Photo by Gregg Scott
News
August 2, 2022August 16, 2022 Editor

The Almanor Fishing Association’s (AFA) 29th annual Family BBQ and Fundraiser, held on Saturday, July 30, was a sold-out event with all 550 tickets gone weeks before the event was to be held at Rec. 1 on the Peninsula.

With that many promoters of the AFA and the work they do to keep Lake Almanor and its world class fishery healthy, it should not be surprising that the heavens opened up and delivered a wealth of new water for the basin. To be sure the rain did not dampen the spirits of those attending. Those that didn’t bring an umbrella may have sought shelter under the trees, bit the steaks went on the grills and the many raffles and auctions proceeded just as if it was a bright sun shinny day. When the perfectly marbled New York steaks went on the grills, the aroma could be enjoyed clear out to the parking lot.

AFA President John Crotty gave a huge shout-out to Pacific Seafood for a great deal on the primo steaks and for donating the steaks for the Veterans Fishing Day, sponsored by the AFA in June. It takes year-round dedication for the members to raise and feed daily the 50,000 to 100,000 fish the association releases into the lake each spring. It just shows that a little rain never stopped a good fisherman or woman.