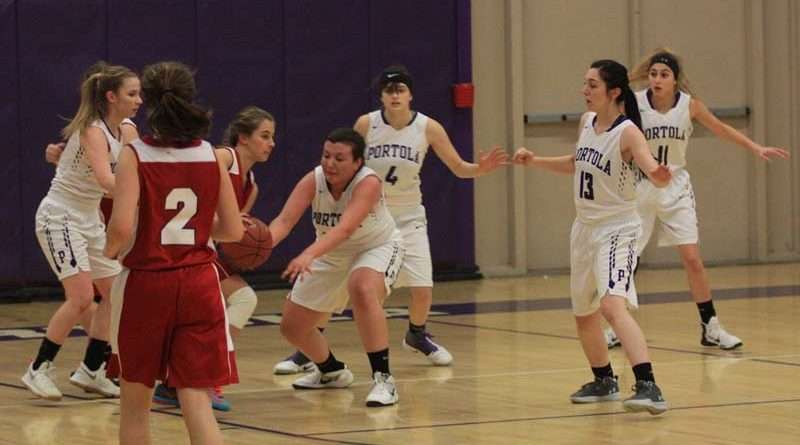 The Quincy High School Trojans girls’ basketball team took to the road this past week splitting games against Portola and Maxwell.

Boyd grabbed an incredible 9 rebounds for Portola, with Christina Silva pulling out the stops adding 8.

This match-up between county rivals was well worth attending as it ran at a fast pace throughout the game.

The Trojans will face the Tigers again on Valentine’s Day, Feb. 14, at Quincy in a rematch that may decide the Mountain Valley League title.

The Trojans next traveled to Maxwell on Jan. 27 where they defeated the Panthers 51-31.

The Trojans were initially led onto the board against Maxwell by senior Kaylin Henderson who snared 13 rebounds.

Seniors America Little and Tessah Belcher provided strong depth with their rebounding and steals while frosh Jaeden Stephens contributed heavy minutes and a physical inside game.

The Trojans girls’ basketball team now stands at 10-8 overall and are in second place in the Mountain Valley League.

Quincy will take to the road tomorrow, Feb. 2, to battle Loyalton and returns to league play Friday, Feb. 3, when they will face Esparto in a home game at QHS starting at 5:30 p.m.

With the win, the Lady Tigers improved to 7-10 overall and 3-0 in Mountain Valley League play.

Maddie Boyd led the Lady Tigers offensively with 15 points and 12 rebounds, followed by Christina Silva with 12 points and 10 rebounds.

Portola is set to play next on Feb. 3 against Mountain Valley League opponent Biggs at a home game in Portola. Tip-off is scheduled for 5 p.m.