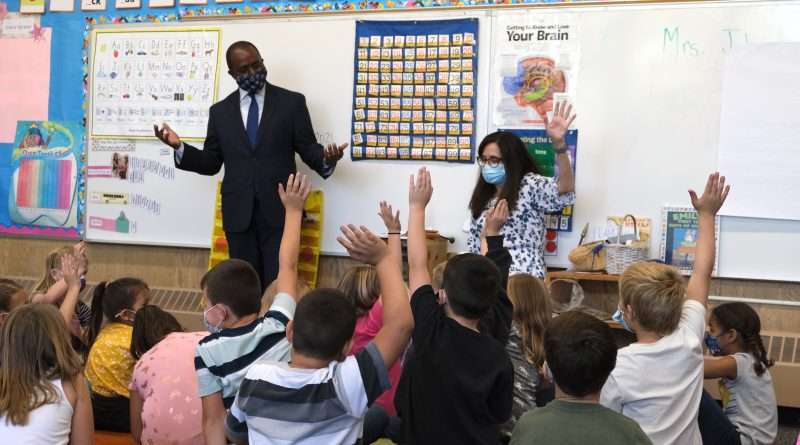 The first day of school on the formerly closed campus included a visit from the state superintendent, Tony Thurmond, who flew from Los Angeles that morning to Reno, and then made the trek to Taylorsville to first meet with administrators and teachers, and then students.

Thurmond began by asking what was needed the most.

“Portables,” said Plumas Charter School director Taletha Washburn. The charter elementary school students are currently using the Gem and Mineral Museum hall for their classroom space. New portables would be set up in the lot adjacent to Indian Valley Academy, next to the Historic Grange Hall.

“Tomorrow,” said Washburn. While it was acknowledged all around that the speed of getting portable classrooms set up could not be done overnight, Thurmond made a pledge to get them there as soon as possible and well before January—which is originally when the school was told they could get them.

Thurmond vowed to get the ball rolling and asked what else was needed.

“Internet,” said more than one person in the small group of education administrators in attendance. Even before the Dixie Fire, it’s fairly common knowledge that Internet speeds in Indian Valley are slow—sometimes mimicking the speed of dial up from the early 90s.

“Anything we can do to be helpful to you, we will do,” said Thurmond.

“There was urgency before the fire [for high speed Internet] even more urgent now. There are lots of new things we are learning this year,” said Plumas Unified School District Superintendent Terry Oesterich.

Kristy Warren, PUSD’s assistant superintendent, voiced the need for leniency in filing deadlines for school audits given all the changes the Dixie Fire has brought to the district.

Thurmond responded that his office was committed to helping Plumas Unified School District and that normal deadlines for filing would be extended for them as soon as they apply for extensions.

“We are not going to ding you under audit deadlines you can’t meet,” said Thurmond.

Warren and others stressed that COVID was a continuing concern as it relates to distance learning and flexibility. While California’s COVID numbers as a whole are the lowest in the nation, the per capita numbers in northeastern California are much higher. Typically, when a student goes on independent study, an agreement is drawn up with the assumption that the student is doing independent study or distance learning for the long haul. There isn’t yet a provision for a student just going to distance learning during a COVID quarantine period (two weeks).

“We will work with you. You will not lose funding because of this. There should be no perverse consequences of something you cannot control,” said Thurmond acknowledging the challenges of conducting school in a new location.

It was also mentioned that the district could use faster COVID tests. The district would like the faster Binax tests that give results in 15 minutes.

“I really want you to get results fast,” said Thurmond.

Next Thurmond toured the Taylorsville Elementary School building, which in recent years had been used for outdoor activities with the district or with Sierra Institute’s P-CREW program.

Other changes include food service for both GES students and charter students, which is now situated at the former Hanson’s Homemade commercial site down the street.

Greenville Elementary School had 109 students registered and attending school last year in Greenville. Warren expected the numbers to go up from 74 now that some residents are back in Indian Valley.

“It’s so nice to see it being used as a classroom again,” said Taylorsville resident Patty McCutcheon. The small school has only three classrooms with an additional building that once housed the school library being used for kindergarten.

Thurmond stopped in first- and second-grade teacher Maria Johnson’s classroom to speak with the students. “Raise your hand if it’s a good day at school,” said Thurmond. Every hand was raised as high as it could go.

Following his stop in Taylorsville, Thurmond went through Greenville on his way to visit the Chester campuses.