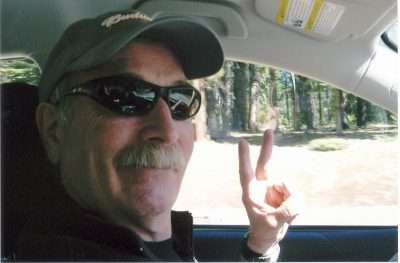 Stephen (Butch) Myers was born on August 4, 1948, the second child of Virginia Sabina Rentz and Dwane William Myers. He was born in Dubuque, Iowa, across the river from where his paternal side of the family lived and farmed in Wisconsin. In 1953, the family moved to California where Dwane taught school in Oakland, McCloud, and finally in Chester, where they settled to make their home and raise their growing family.

When they arrived in Chester, Butch was an eighth-grader and quickly became very active in sports and other school activities. He played football and ran track at Chester High School and also played the coronet in the band. The band won many competitions throughout his participation and Mr. Welch recognized his superior ability with the coronet, which came easily to Butch. He was very proud to be commissioned to play Taps occasionally for funeral services throughout the area. Butch graduated from CHS in 1966 and married his high school sweetheart, Kaye Todd. Their son Neil, was born in February 1976. Butch earned an Associated Degree in Forestry at Shasta Jr. College and eventually earned a Bachelor’s degree from Chico State.

For the most part, Butch made his career in the forestry industry. He worked in the woods and as a scaler at Collins Pine and held other positions there as well. He retired from Collins Pine several years ago.

Butch was very energetic and indulged in outdoor activities throughout his life. He loved riding motorcycles and competed in motocross races throughout the Northstate. He and his son Neil, attended the annual Moto GP motorcycle races and built many fond memories together at that venue. Butch was also an avid skier and traveled several times out of state to capture the perfect ski excursion with friends over the years. Later in life, his favorite adventure was fishing at Canyon Dam with his son and other family and friends. In addition, he still continued to ride his bike and walk every day.

Butch was a very considerate and accommodating person, always willing to listen. He might throw out a curve ball now and again during your conversation because of his wicked sense of humor, but he genuinely cared about people’s well-being. For instance, when his mom showed signs of dementia, Butch stepped up and became her driver to wherever she wanted to go. Sometimes he would just pick her up and drive around the lake so she could get outside and enjoy nature. Once, he drove her to her grandson’s wedding in Sausalito. She was there for the pictures and then he drove her back home to Chester before she got confused.

Butch also took his brother Jeff under his wing. For the last several years, Butch would select a yearly destination and he and Jeff would drive several hundred miles throughout the United States checking things out. Jeff loved these trips and has a barrage of pictures from throughout the country that he never would have gotten to see if not for Butch’s generosity.

Cancer was unforgiving in Butch’s situation. He did everything right, but to no avail. He lost his battle to it on February 25, 2021. He is survived by his son, Neil Daniel Myers and his siblings: Marie Routhier White, Lynn Moore, Ron Myers, Jeff Myers and Vickie Newlin. He was preceded in death by his parents and his sister Chris. The family would like to personally thank Karen Kemp with Hospice for her intelligent and thoughtful care during Butch’s last days. We are also eternally grateful to our sister Marie, and Dennis for opening up their home for Butch’s final days.

We will all miss Butch for his wit, his compassion and his ability to invoke laughter in almost any situation. Butch has chosen to be cremated, but condolences may be made at Blair Funeral Home. A Celebration of Life for Butch will be announced in the near future.