Steve “Savage” Sasser, 74, of Quincy, passed away peacefully on January 15, 2022, at the VA Hospital in Reno, Nevada, with his loved ones. He is survived by his children, Shonn Sasser, Echo Sasser, Airi Kirtley, and grandson Orion Shipherd. 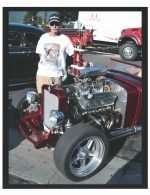 At age 18 Steve joined the US Navy and was shipped out oversees to see the world. He had fond memories and great stories of his time stationed in Australia and Guam. He enjoyed working with his hands which led him to a career in construction after his service in the Navy.

Steve loved muscle cars, hot rods, NASCAR and all things fast. He earned the nickname Steve “Savage” Sasser during his time of racing the #88 stock car at the Quincy fairgrounds. Over the years he was always involved in building or working on a racecar, hot rod or some kind of toy. Growing up on a lake as a kid he developed a love of water sports and boating. Later on, many great years were spent gathered with friends and family at one of his favorite places on earth, Bucks Lake.   With a drink in hand he had his slice of heaven overlooking the lake from ski beach.

Steve made a lot of close friends throughout his life. He will be missed and will always remain in our hearts.

A celebration of life memorial will be held at the Veterans Hall in Quincy on February 19th at 2pm.