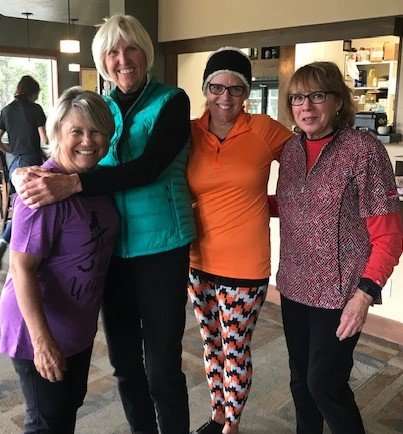 The GMWGC season-ending games took place Oct. 7 with the club’s 37th annual Turd Tournament. The tournament is so named because, at this time of year, the fairways are aerated which, in days of old, left mud plugs (turds) all over the golf course. The 2021 weather was cool and sunny for the game and the players got into the Autumn theme with their attire. There was a “treat” on many holes to make things more interesting, such as a free drop on the far side of the river, and of course pumpkin bowls of candy on several tee boxes.  Play was followed by a festive luncheon at The Restaurant at Graeagle Meadows.

The 2021 Turd Queen is Nancy Linch, with the low net score of 62.  The team game was the best two net balls of the foursome.  First Place, went to the team of Mikie Burdick, Cathe Franck, Nancy Linch and Judy Rossi, with a team net score of 110. The Second Place team included Lois Childress, Jen Colley, Renee Miller and Dee Walker (112). Third Place went to the team of Holly Anderson, Priscilla Piper, Pat Prather and Sharon Russel (114).  Dottie Hattich captured closest to the pin honors on hole 3, 12 feet, and Judy Rossi took second closest getting her ball within 36 feet.

The 2021 GMWGC Awards Luncheon will be held Thursday, October 14th, at the Grizzly Grill in Blairsden.

The men reported the following details for club activities on Oct. 12.

There was no report of the results for the Oct. 10 games.