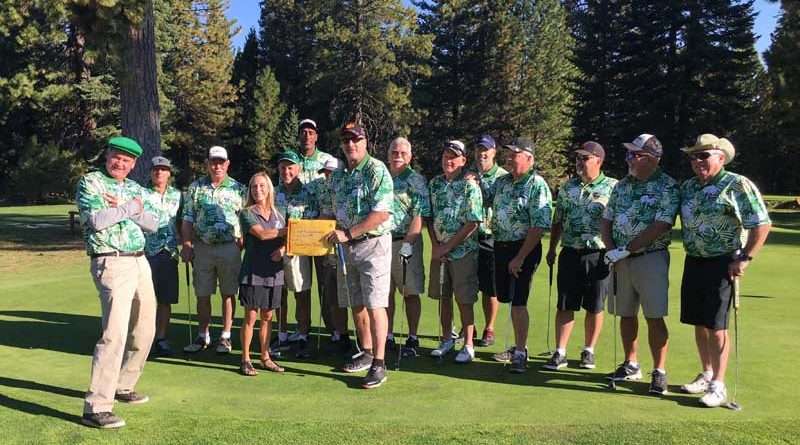 Lake Almanor West Golf Course was the venue for the Stoveeney Open on Sept. 30, an unofficial golf match organized by Jeff Stover and Brian Sweeney, both from Chico, to raise funds for the Chester High Boosters Club in support of the high school’s athletic programs.

The group of golfing buddies raised $2,375, an amount that Dawn Bereznak, Boosters vice president, said was extremely helpful to the needs of the school’s inadequate sports budget.

This is the seventh year of the Stoveeney Open and the third year they’ve golfed to raise funds for Chester High School student athletes.

The tournament’s name “Stoveeney” is an amalgam derived by combining the last names of Stover and Sweeney. Both men have vacation homes in the Almanor West area, where they stay while playing golf at local golf resorts.

Stover, a former San Francisco 49ers defensive lineman between 1982 and 1988, said he and his golf friends thought the tournament provided a great opportunity to give back to the community in some way, “especially knowing that the athletic department at Chester High could really use the help,” given that funds for school sports are limited.

Stover noted that the players were happy to be on board and “responded very generously,” adding that, “We’re fortunate that we can give to benefit others.”

Bereznak said the Boosters Club is very appreciative of the support given by co-organizers of the Stoveeney Open and the golfers for their generous donation.

The money will go into the Chester High Boosters general fund, she said, which will be used to benefit all Chester High sports teams.