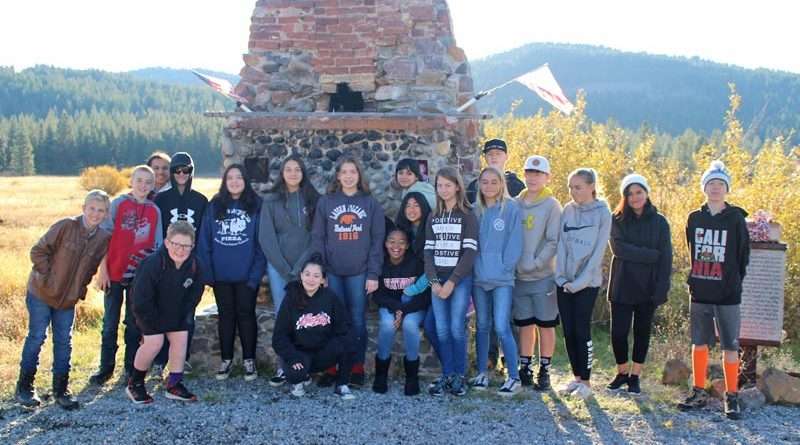 Westwood seventh- and eighth-graders pose at “The Chimney” before starting out on their mission to plant several hundred willow branches along the riparian zone of Goodrich Creek. Science teacher Jon Foy said he wanted his students to be part of the STRAW program as an opportunity for them to learn more about restoring the watershed, the importance of protecting and enhancing animal habitat and being good stewards of the land. Photo by Stacy Fisher
News
October 30, 2019November 6, 2019 Stacy Fisher, Staff Writer

Approximately 17 miles east of Chester, a yellow school bus pulls off into “The Chimney” turnout where it dislodges its cargo of eager students from Chester and Westwood schools for an outdoor excursion to plant hundreds of willow branches along the Goodrich Creek stream bank in Lassen County.

The project is part of the Students and Teachers Restoring a Watershed (STRAW) program, a collaborative effort of K-12 students and teachers leading their communities to restore and enhance local ecosystems by participating in habitat restoration activities.

The STRAW program has been adopted as part of the Plumas Unified School District’s “Outdoor Core” curriculum led by Outdoor Education Coordinator Rob Wade, and supported by the Plumas County Office of Education.

The armada of students converged upon the riparian corridor of Goodrich Creek over a four-day period starting Tuesday, Oct. 22, through Friday, Oct. 25, to begin their work with parent volunteers and staff members.

STRAW has the added advantage of bringing an integrated science education to local schools, providing all the benefits of a professional-quality habitat restoration program through outdoor studies.

Representatives from various organizations partnered with STRAW work closely with teachers, providing lessons beforehand in each classroom explaining to students the ecology of the area they’ll be working on.

Since the organization’s founding by Laurette Rogers in 1992 in Marin County, STRAW has grown to serve and educate over 50,000 students, and today reaches students in many counties throughout California to restore dozens of sites.

Managed by Point Blue Conservation Science, a nonprofit conservation group dedicated to conserving wildlife and ecosystems through sound scientific principles, the STRAW program partners with scientists and educators, private landowners, state and federal agencies, and local schools with field offices all over the world, including an office in Chester.

Point Blue Conservation Science Director Ryan Burnett acted to bring the STRAW program to Plumas schools to advance the organization’s mission, relying on a number of partnerships including Sierra Pacific Industries, the landowners of the meadow property at Goodrich Creek, USFS, the Plumas Unified School District, biologists on loan from the Collins Pine Co., along with other natural resource professionals who work hand-in-hand with students and teachers to assist with each project.

Other organizations that have partnered with Point Blue include the Natural Resources Conservation Service, Partners for Wildlife program at U.S. Fish & Wildlife, the Bureau of Land Management plus organizations like the Feather River Land Trust.

Partners have made a commitment to be a part of the effort for community-based science education in the furtherance of habitat restoration, Burnett noted, and to train and inspire the next generation of stewards of our natural resources.

He said this is the second year in a row that several dozen students arrived on their assigned days at the Goodrich Creek location, where they were provided a few minutes of orientation before marching down to the meadow and to a base camp set up earlier in the day to receive further instruction on planting willows along the creek.

A number of small red flags had previously been staked in the ground to indicate where the willow branches would be imbedded. Once they have time to grow, the willows are expected to provide wildlife habitat and help to shade and hold the stream bank in place.

Burnett said they had recently come to check out the restoration work done last year, when approximately 750 willow branches harvested locally were planted and found that nearly 75 percent of the inspected willows had survived and taken root. The current goal he said is to plant three times as many this year to really jumpstart habitat growth.

STRAW partners will continue to monitor the health of the plants over the course of several years, and to make sure the plantings are thriving to reduce erosion.

Students grapple with long metal “rock bars” to dig holes where each willow branch would be inserted near the creek bank. One end of each branch is then inserted into the hole and covered up with soil to keep it firmly positioned.

Each plantings is then inspected to make sure they’re deep enough and will take hold.

Burnett said the kids planted Lemmons willow and yellow willow, the two native species found in the local region, which are perfectly adapted to the area.

Once the matured willows are firmly established, they help hold the stream bank in place by slowing the flow of topsoil during the spring thaw, Burnett explained, which reduces erosion and also create more habitat for a declining bird population, by allowing birds to feed off the insects that crawl along the branches.

Burnett noted that the remarkable thing about the willow plant is if you cut off a branch from the main bush and just stick it into wet ground, it will grow a whole new plant without requiring an initial root system.

Depending on site conditions each willow branch takes about two years to anchor securely in the ground and take root, and reaches full maturity in five to 10 years.

After spending several hours outside, students returned back to school to incorporate what they learned into their science curriculum.

The STRAW program offers students an experiential learning opportunity Burnett said, adding that it’s a way to help them understand the importance of watersheds and how they are critical to animal habitat. He hoped students would develop an appreciation of the value of conservation practices that protect endangered species and embrace the values of environmental stewardship throughout the rest of their lives.