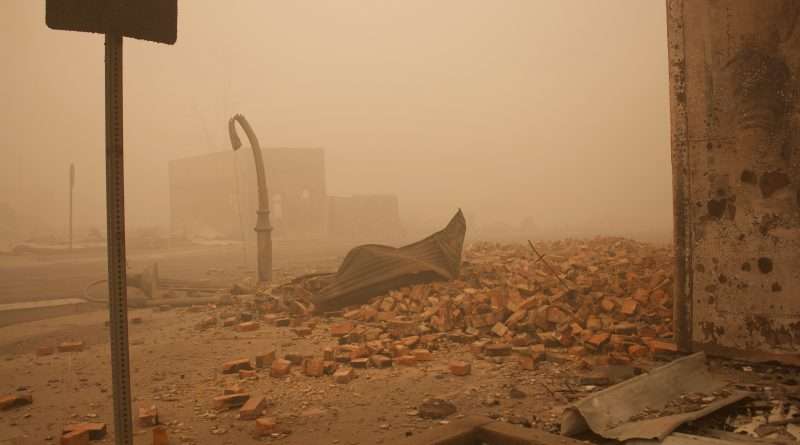 I visited Greenville in person for the first time last Friday, Aug. 6, and was overwhelmed by the devastation I witnessed.  As some may have heard me mention previously, the best way I can convey a visual image of this destruction is to suggest viewing historical photos of German cities right after the massive allied bombing campaigns.  This is what Greenville looks like today.  I took many photos, but the visibility was so poor due to the heave smoke cover, these photos do not accurately convey the complete scope of the destruction.  I will now provide a written description of Greenville as I viewed it last Friday, Aug. 6, 2021.

Downtown: Except for Indian Valley Professional Building (IVCSD offices), all of the downtown business district, and the residential area between Main Street and the PUSD schools are completely destroyed.

Most Structures along Humphrey Circle, and the south side of Highway 89 up to the grade survived, but some did not.   The Oak Grove Motor Lodge was 90 percent destroyed.  Some structures on Cheney Road and Standart Mine roads near the highway survived, but some further up these roads did not survive.  Structures on Williams Valley Road were mostly destroyed, with one structure near the county barn surviving, and three structures surviving just above the split with Lower Williams Valley Road.

Areas of little or no damage:

All of the structures along Alta Camp road survived, but structures on the opposite side of the highway were destroyed.