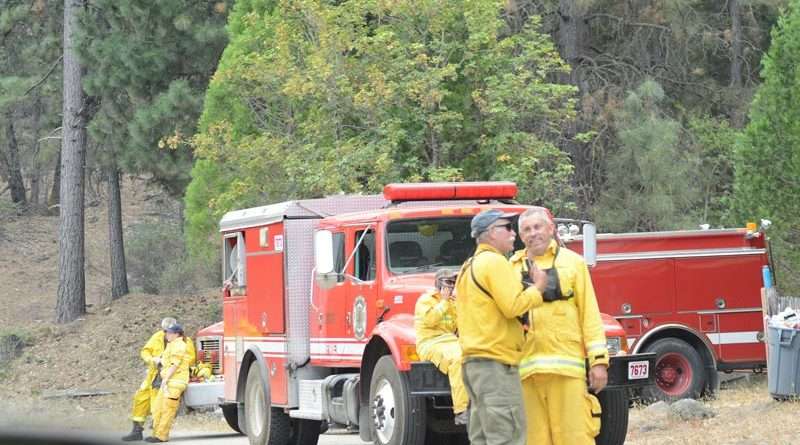 It was day two of the Walker Fire and I was driving to Flournoy Bridge in Genesee Valley.

As I headed out from Quincy on my own I was anticipating one type of a news story to unfold. What I got was very different and given the day and fire activities I think it was good.

Passing what I later learned is the Heart K Ranch, I waved at Leif Alexander, a volunteer with the Meadow Valley Fire Department. I drove on to my first destination, the opposite side of the Flournoy Bridge.

Finding a safe place to park, I checked out the rough wagon-circle of USFS engines and their crews. MNF was prominently displayed everywhere — Mendocino National Forest.

Picking out what I hoped was one of the fire bosses, I approached him at his white pickup, showed him my press ID and asked what he knew.

Not much. They’d just arrived. He didn’t know if there was an incident command set up, who was in charge or where they were heading.

Okay. Regroup. I headed back to my car and finally decided to head back to the Heart K, see what the men were doing on structure protection and then watch the aerial show from across the two-lane black top.

As I figured, I was more than welcome at the Heart K. Warren Grandall, a retired Plumas National Forest professional also greeted me.

As Leif and I talked about their assignment at the Heart K, he said much of their work was done. The night before they rid the place of much of its dried brush and watered the area around the main house as part of their standard structure protection. A sprinkler was going on the lawn in front.

Leif said they’d spent the night on the porch of the main house— a generous, covered affair that one of the men chose to call a veranda.

Back to the topic of the Walker Fire, Leif pointed to a section of the fire on the mountains across Heart K’s meadow. Leif said there was some concern that the fire might come down the draw. When he wondered how far down it had advanced, I volunteered to go check.

Passing the same PG&E watch person I’d passed 45 minutes or so earlier, I waved again, and chose a spot off the side of the road amidst dried grasses and pinecones.

Using my telephoto lense I put it on the 300 and chose two trees as a guide to check for the fire’s progress downward.

Then I watched and took shots of the air tanker display as two planes worked the backside of one of the ridges. It’s always exciting, and I think people come to expect that dramatic showing of red/pink fire retardant drift right after a plane has dropped its load. I did get two unspectacular shots of the brightly color colored drift, but the planes were already flying away heading for Chester or Redding to reload.

When I first arrived at the fire the smoke still hung heavy in the valleys, but as I set out to watch the aerial displays, the color of the smoke was changing from white with several areas of dark to darker brown indicating heavy fuels and fire.

Checking back to my two marker trees, the fire hadn’t progressed. I would check two or three more times as I moved my car to new locations, moved back and forth across the nearly abandoned road, and took dozens of photos.

At one point I remember choosing a large black rock to sit on  between a fence line and the roadway. It must have been the warm weather, but I was greatly surprised to find that the rock was hot. Then I noticed that even through the thick soles of my yard sale find Red Wing boots I could feel the heat. Odd. I wasn’t really prepared for that.

Noting that the tankers had left the area, leaving the smoky skies to what I assumed was air command, I decided to head back to the Meadow Valley team with my news.

By this time Ron Heinbockel had appeared. He’s another veteran firefighter from the PNF — someone I’d worked with quite a bit on past fires. As fire chief of the Meadow Valley department, he was there on structure protection, something he wouldn’t have necessarily done as a fire boss.

It was great chatting with Ron. As we watched the air replacements for the tankers, we watched as four helicopters — two LAs with snorkels, and two K-Max with buckets — refill with water from a creek and head to various points on this side of the fire.

Ron told me the differences in the two types of helicopters on scene. The snorkel type can slurp up 300 gallons of water, the K-Max holds a 1,000 gallons in its bucket.

Realizing that this was the better part of my story, I’d already arranged to follow the MVFD engine and its three-man crew to do some structure checks.

Soon I was following them back across the Flournoy Bridge where more green engines and crews waited, then to the right and down one of the dirt roads.

The big red engine kicked up quite a bit of dust through this dry end-of-summer landscape.

Eventually, to the right of the road was a fenced tombstone. I didn’t take time to get out and read the inscription or the plaques.

Then just down the road was  the old farmhouse. Some of its windows were boarded up. Was  that the old outhouse in back? A row of apple trees was also noted. Their crops must have been enjoyed when long winters came along in the past.

And then there was the barn, a structure not like others I was used to seeing. Granite rocks were used as the foundation. As with the house, boards were laid vertically to create the structure. A new metal roof had been added to help preserve the structure.

And then we were turning around, passing the house, the lone grave and back the way we came. When we got to the bridge we continued on and were soon stopping at a house where the Quincy Fire Department volunteers were stationed. Someone had put a wide line completely around the structure and its outbuildings.

As I took in the setting, here was John Gay, another retired PNF fire boss I’d worked with in the past. We shook hands. Volunteer Kevin Correira and I nodded to one another.

When asked, John said they’d enjoyed a breakfast of burritos, a sandwich and larp — whatever that is. During the first 24 hours of any fire, crews come to understand they won’t be fed. It’s a scramble getting an incident command in place, showers and toilets set up, and kitchens and eating accommodations in place. People like John, Ron and Warren know to be prepared with foods squirreled away in their packs and plenty of water. Others quickly learn.

Also at this sit, and just across the road at a large red barn, the Beckwourth Fire Department engine and small crew were stationed.

We’d eventually head on down the road until we meet up with Bob Orange and others with the Indian Valley Fire Department.

It was an interesting turn to a story that wasn’t going to happen they way I’d initially projected. It was fun to meet up with some of the old lions that had known many, many past fires. And it was good to see people out of their usually roles — Leif as a paramedic or EMT at Plumas District Hospital, Kevin as the director of Facility Services for Plumas County.

It was 4 p.m. when I took my last photos of the smoky mountain range, some content cows and their new calves in a field.

It definitely wasn’t what I’d set out to do, to get a story on the fire and to see flames and ground crews at work, but I was quite content with how the day had played out.