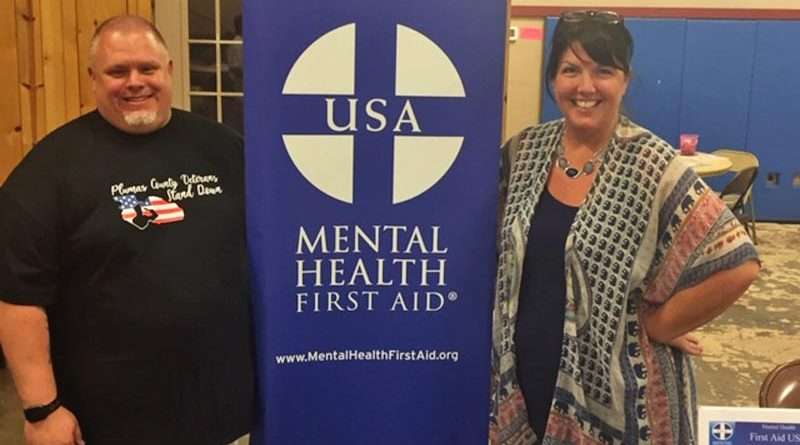 The September Suicide Prevention and Awareness group meeting was a watershed, marking the end of the three-year grant that focused on services for Feather River College students. The funding for this comprehensive effort came from a small federal grant awarded to FRC in collaboration with Plumas Rural Services (PRS) in 2016. PRS used grant funds to train students and staff in safeTALK (suicide awareness skills) and ASIST (suicide intervention skills).

Nina Martynn is the Wellness Coordinator for FRC, a position that came out of this grant. As part of Suicide Awareness Month, she reported on the Walk Out of Darkness and Candlelight Vigil held Sept. 19. The event was designed “to provide resources and a place where people can share their stories, and those struggling can look around and see that they’re not alone,” she said.

Three years ago, she said, there were no mental health services on campus. Now they have a Wellness Center that focuses on mental health awareness.  In addition, they have recently added a mental and behavioral health counselor, Nick Maez.

Also, they have a new Mental Health Awareness Club, said McCarthy, and students “are really excited.” The college has 14 student “peer educators” who will be available on campus for students struggling with suicidal ideation or with losing someone to suicide.

In addition, college resident assistants are being trained to recognize students who may be having mental health problems and to begin a dialogue with them.

The involved students are “really owning it,” said McCarthy, noting that, rather than saying they want to reduce the stigma of mental illness, these students talk instead about “erasing the stigma” altogether.

Now, with the FRC grant finishing up this month, the working group will be refocused as the Mental Health Awareness Working group.

While it will still emphasize suicide awareness and prevention, Nowling said, the group will work on a wider range of mental health issues. Those who have experienced domestic violence or sexual assault, and those who are veterans or first responders, for example, also have a significantly higher suicide risk. In fact, first responders are more likely to die of suicide than in the line of duty, said Nowling.

The MHAT grant will continue to provide suicide awareness and intervention training. In addition, it will provide Mental Health First Aid training, a more comprehensive course that will help train community members to assist someone experiencing a mental health or substance use-related crisis.

Nowling said that PRS is certifying local people to provide these suicide prevention/mental health trainings, which keeps grant dollars local, builds sustainability, and ensures that trainers committed to the health of this community are leading the way.

Nowling said training EMS first responders is very important. And, convincing health care providers that they are “really instrumental in suicide prevention because they are on the front line” is essential, as well.

“Fifty percent of people who kill themselves saw their primary care provider within the month prior,” Nowling said. “We need to train [health care providers] to recognize and have screenings for suicide.” Having patients fill out a form isn’t enough she insisted. “Providers need to be intuitive and have some skills around the conversation.”

Research shows that middle aged and older white males are at higher risk for suicide. Men experiencing chronic pain or living alone are at an even greater risk, Nowling said.

Men also are much more likely to share physical symptoms rather than mental or emotional ones. Nowling suggested that a primary care physician could ask questions like, “How has your mood been?” If a patient is not sleeping, they might ask, “Do you have thoughts that are keeping you up? What kind of thoughts?”

Community groups or individuals interested in learning more about the different training sessions or signing up for one in their local area, can contact Tammy Masters at [email protected] or call 283-02735 ext. 882.