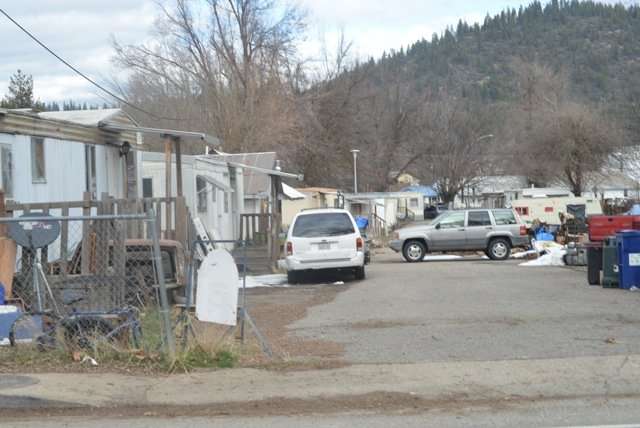 A view of the Downtown Trailer Park in Quincy from the driveway off Bucks Lake Road. Photo by Victoria Metcalf
News
February 9, 2021February 12, 2021 Editor

Steps are now being taken to encourage the State Department of Housing and Community Development (HCD) to revoke the license of those operating the Downtown Trailer Park in Quincy.

Members of the Board of Supervisors voted unanimously to send a letter to the HCD chief encouraging that move during its Feb. 9 meeting. Approval allows Chairperson Jeff Engel to sign a letter to HCD Chief of Field Operations to “Take swift and sweeping action in this matter to move the Downtown Trailer Park license status from suspended to revoked so that the park can be abated.”

In a letter addressed to Matthew Weise, chief of HCD’s field operations, supervisors requested they take the “necessary actions to once and for all abate all the hazards within the Downtown Trailer Park.”

In the letter, supervisors point out the park has decades of history concerning alleged compliance issues “in the forms of blight, hazardous housing conditions, high frequency of calls to the Plumas County Sheriff’s Office, and a potential hazard to the community as a whole due to the conditions that have been allowed to continue.”

According to supervisors, “all of those fears came to fruition on July 29, 2020, when a fire broke out in the trailer park.”

The fire, that destroyed at least two mobile homes within the park, a brewing business and the home offices of the Plumas Crisis Intervention and Resource Center, was the subject of an investigation as to its cause.

On Aug. 11, 2020, various investigators met at the site in an attempt to determine the fire’s origins.

According to the supervisors’ letter to HCD, a report from the Quincy Fire Protection District that included the results of the investigation, put the alleged cause “to be either the reckless use of (a) grinder throwing sparks into vegetation or a discarded cigarette by the user of the grinder.”

Quincy Fire Chief Robbie Cassou stated that the source of the fire ignition remained unknown, but it did begin behind trailer 16 in a grass area. “Once the trailer ignited, it generated radiant heat which traveled to the nearest opaque surface (of Quintopia brewery) catching the siding on fire.” From there the fire spread.

In the letter, it was reported that the grinder was in use in remodeling a trailer. Dave Ricetti also explained the use of the grinder to an insurance attorney, Aug. 11.

“This demonstrates the park owners’ (alleged) continued disregard for regulations, or being concerned with the ramifications of not following state regulations that require a Permit to Construct from HCD to perform any repair work,” according to the letter.

Dave Ricetti and his wife, Sharon, own the Downtown Trailer Park.

Supervisors also outline the terms of the HCD suspension. HCD stipulates that the owners cannot “operate, occupy, rent, lease, sublease, demand or collect rent or hire out for occupancy, any lot within the Mobile Home Park.” The suspension also meant that the owners no longer had a valid permit to operate.

In its letter to HCD, supervisors maintain that the Ricettis were allegedly charging rent to tenants. “This can be confirmed by locating and contacting former tenants who resided at the park post suspension and/or through obtaining owner financial statements, among other methods,” according to the letter.

The county has knowledge that tenants allegedly are living in at least two units.

Due to the fire, power is shut off to the units within the Downtown Trailer Park, according to supervisors’ allegations. “So that would put the park owners yet again in violation, further illustrating that the owners have no intention of ever coming into full compliance,” according to the supervisors’ letter.

In their letter to HCD chief Weise, supervisors state that they do not want to be put into a position of needing to take additional action with HCD to resolve what is considered an alleged continued hazard to the community. “If immediate action is not taken by HCD, the county will explore all of its options.”

That same year, the county of Plumas was set to take the Downtown Trailer Park property to public auction for property tax default, according to White. Under law, the county can legally do this when at least five years of tax defaults are owned to the county, White explained.

That didn’t happen when the Ricettis filed for bankruptcy in 2019. The bankruptcy put a hold on county activities toward public auction, White said.

However, the property recently came out of bankruptcy, she added.

As of December 2020, the Ricettis, as owners of the Downtown Trailer Park, added another $3,656 to their default property bill, according to Plumas County Tax Collector Julie White. Prior to that increase, the Ricettis owed $36,756 in default taxes since December 2012.

Dennis Thibeault, retied executive director of PCIRC, explained that the Downtown Trailer Park owners did have an offer of $400,000 for the park including mobile homes.

In working with Dave Keller, the then executive director of the Plumas County Housing Authority, a grant was received for $35,000 to pay for an architect’s rendering, and a professional property assessment of the trailer park, as well as the Harlem Club located on Cemetery Hill in Quincy.

Although Thibeault couldn’t remember the dates, if PCIRC could secure the Ricettis’ approval to move forward, another $2.5 million would have been available for new housing. Thibeault said that the Ricettis put the price tag of the Downtown Trailer Park at around $900,000. There was no way they could meet that demand and the grant was eventually dropped.