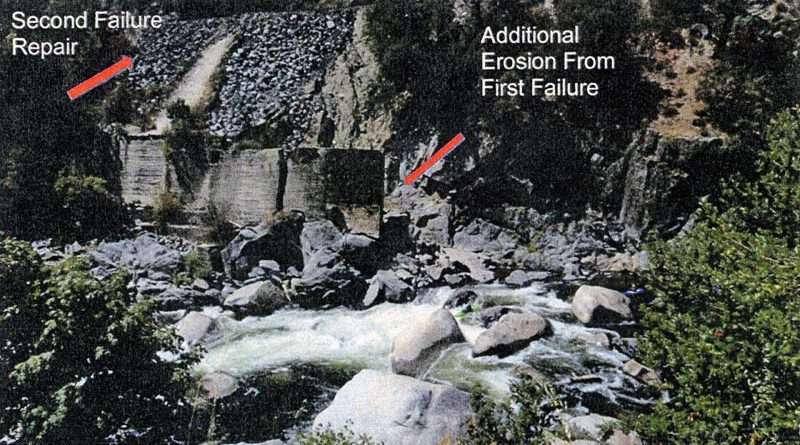 This is a photo included with the county supervisors’ letter to Union Pacific Railroad. It was taken in August 2017 and shows repairs, but also unresolved damage to the retaining wall. Photo submitted
News
November 19, 2018November 16, 2018 Victoria Metcalf, Assistant Editor

Public safety, the environment and a seeming unwillingness by UP to address the situation is among the county’s concerns.

“Finding a durable solution to the problem,” is part of an appeal in a letter to Gordon Thompson, general director Track Western Region of UP Railroad in Roseville.

The letter, approved by Supervisors on Tuesday, Nov. 6, is not the first time Plumas County has attempted to engage UP in discussions about the damaged retaining wall. Previous concerns have gone unaddressed, according to Supervisors.

It was Aug. 27, 2016 — more than two years ago — when boaters were out on the North Fork Feather River that damage to the retaining wall was noted.

Apparently the retaining wall cracked and much of the material behind it washed into the river, according to the American Whitewater group. That group immediately notified the Plumas National Forest, California Department of Fish and Wildlife, the regional Water Quality Control Board and Plumas County officials about their concerns.

Members of AW, California Sportsfishing Protection Alliance and Trout Unlimited, sent a letter to Thompson of UP on Oct. 29, 2018. “We are writing to request remediation by Union Pacific Railroad of the ongoing and increasingly serious threat to public safety caused by the instability of the railroad’s retaining wall and adjacent hill slope on the North Fork of the Feather River near Tobin,” wrote Dave Steindorf, hydropower specialist for AW, and others.

At that time, and followed by county supervisors’ recent letter, is a series of photographs showing the damage to the retaining wall. According to supervisors, they “document the real and increasing risks of failure.”

Supervisors point out that the UP repaired parts of the railroad’s embankments after the 2017 floods, but “the efficacy of Union Pacific’s efforts to solve this ongoing problem are again questioned as the eroding area increases in and around the Tobin retaining wall.”

Supervisors also voiced their concerns about the upcoming approach of an El Nino winter.

Supervisors, as members of the Ecological Resources Committee, have also briefed that organization about their concerns not only to the stability of the wall, but also the railbed.

Although a list of hazard materials hauled by UP through the Feather River Canyon isn’t immediately available, should this system fail while a shipment is en route has not been addressed. “I don’t have a complete list of all commodities hauled by UP,” said Supervisor Jeff Engel. “But I’m sure some are.”

“I haven’t heard any comments from Fish and Wildlife regarding UP’s hauling toxic materials,” Engel added.

“How cooperative is UP? We’ll see what their response is to the letter,” Engel said as chair of the Board of Supervisors.

Tobin is in Supervisor Kevin Goss’ area, but he did not comment by press time.

Western Pacific built the original railroad in 1909. Retaining walls, including the one near Tobin were constructed in an attempt to deal with unstable geology and soil foundation, according to background information.