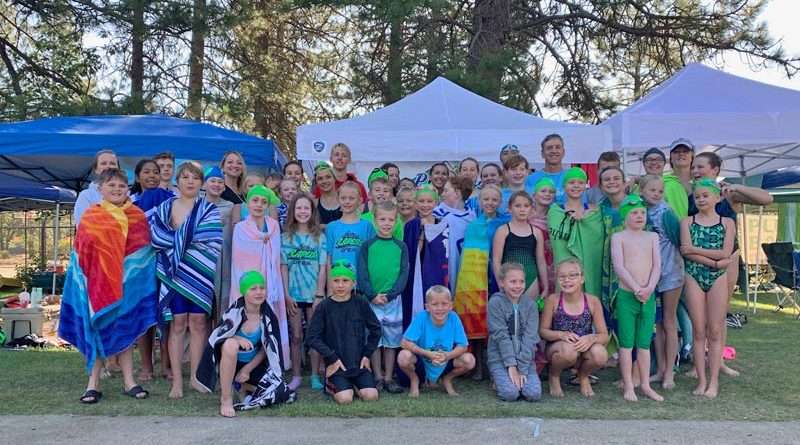 Winning third place as a team, the Plumas Rapids swimmers are all smiles at the conclusion of their home meet. Photo submitted
Sports
August 14, 2019August 13, 2019 Mari Erin Roth, Sports Editor

Plumas Rapids made the most of hosting its annual swim meet in Quincy on July 20 and 21. Pioneer Park and recreation area was “abuzz” with activity all weekend long. The energy around the park and the pool was that of a giant campout of the best of friends. Plumas families put out a big warm welcome mat for the visitors from outside Plumas that will not soon be forgotten.

Matt Warren took on the duties of announcer for the event and seemed to be having a lot of fun with the task.

“If anyone is grateful for the cloud cover, thank your nearest Episcopal Priest … which could be found at the announcer’s booth,” said Warren as clouds provided a break from the blistering heat.

Plumas Rapids swimmer Aaron Irwin was intensely focused on the race lanes in front of him, contemplating his first race, ever. His dad, Paul Cavanaugh, helped him with the difficult task of getting the swim cap on. It’s much harder than it looks, and it looked very challenging. “Do your best, I’m so proud of you, I love you,” said Aaron’s dad. That was the theme all weekend — parents, family and friends supporting the efforts of young athletes in healthy competition.

The Plumas Rapids Swim Team was well represented. A couple of the races featured all Rapids swimmers, every lane. Good sportsmanship was very apparent throughout the day. Kids encouraged kids and offered tips and reassurance. Parents and teammates cheered. Everyone seemed to chime in to root for the littlest swimmers or the last to complete a race.

The tri tip barbeque was so good, it sold out … twice! After running out in the morning, volunteers went out and picked up more supplies and barbequed again! Ice pops and snacks were the measure of the day keeping smiles on faces young and old.

Dedicated volunteers received a special delivery of “chill,” just when it was needed, in the heat of mid-day. Amber Hughes wheeled a rolling cart loaded with fresh iced cappuccinos and cookies to the workstations! Now that is some great marketing to recruit next year’s volunteers!

All in all, it was a terrific weekend for all the swimmers visiting Plumas County and those at home in the Pioneer Pool. It turned out to be a fantastic couple of days for Quincy businesses as well.

With 253 swimmers and their supporting family members camping at the fairgrounds, staying in the motels and eating at restaurants, income swelled for the community over the weekend. “It was our biggest in seven years,” said volunteer parent Amber Hughes, “We were expecting 100 or less.” Nice surprise.

The Plumas Rapids placed third at their home meet and seemed to enjoy every minute of the big annual event. Chances are good they will be hosting another event next summer. Much depends on the condition of the Pioneer Pool. Attention was drawn to the fundraising effort in full swing to pull together money for repairs the pool will need in the next year or two. Anyone interested in supporting the effort to “Save Pioneer Pool” can donate via PayPal at cprpd.com or by calling Central Plumas Recreation and Park District at 283-3872.

A large number of Plumas swimmers, coaches and family support have also been traveling out of town to far away swim meets. “We had a record number compete at the Orland Otters swim meet held in Orland,” said swim team supporter Lynette Choate. “Although our Plumas Rapids have a very short season of just nine weeks and are competing against mostly year around swimmers, they each jumped in and rocked every event they each were a part of and in classic Plumas Rapids fashion.”

The season wrapped up with the big North Valley Aquatic League Championships that took place in Redding this past weekend, Aug. 2 through 4.