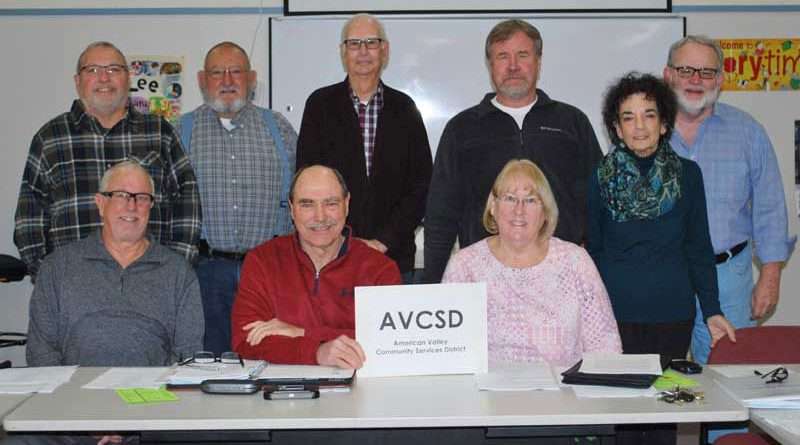 Directors of the newly consolidated American Valley Community Services District covered a lot of ground in their first meeting Thursday, Jan. 11, at 9 a.m.

Officers were elected, general manager candidates interviewed, an insurance carrier was approved and resolutions and ordinances were dealt with.

This is a “brand spanking new certified services district,” Churchill announced at the beginning of the meeting.

Following approval of the minutes from the final EQSD board meeting held Jan. 9 and QCSD meetings held Dec. 20 and Jan. 2, directors moved into closed session.

Although the agenda allotted 15 minutes for directors to discuss the general manager position in closed session, directors took more than an hour to interview two candidates and for follow-up discussion.

“No decision was made,” Churchill said when the audience returned and following a short break by the board. “Our intent was not to.”

Churchill said that directors must generate job descriptions within the next 30 days and then bring Green and Doohan back.

The president was given the power to sign all legal documents since the new district has no general manager at this time.

Another major item on the agenda was choosing a new insurance carrier. Both EQSD and QCSD directors had heard presentations from Quincy-based Flanigan-Leavitt and Special District Risk Management Authority.

Directors voted unanimously to hire Flanigan-Leavitt. Churchill pointed out that the local firm was less expensive than SDRMA’s bid. It also included a larger base for coverage, said Director Darrell Brown. Flanigan-Leavitt’s coverage group is out of the area. It’s under the California Rural Water Association Member Guard served by Glatfelter Public Practices. However, Flanigan’s home office is in Quincy giving directors or employees an almost immediate response to questions or issues.

To guarantee coverage, the completed paperwork for both bids was available at the meeting for the president to sign. Either way, Administrative Secretary Katie Nunn was prepared with everything the board needed to ensure insurance coverage continued for the new district.

Despite some initial confusion about how directors and the public could distinguish between the two offices, directors voted to officially call them East and West. East refers to the former EQSD and West is for the former QCSD. Initially, directors tried calling them Zones A and B.

Directors were to approve a resolution for an interim employee pay scale and benefits, but Josh Nelson from Best, Best and Krieger Attorneys recommended they keep existing plans in place until directors and especially a personnel committee has time to more thoroughly review the information.

Nelson has been with both boards through the consolidation process. He has also guided the new organization through the Plumas County Local Agency Formation Commission.

QCSD and EQSD have different pay scales and benefits packages. A committee comprised of directors from each district made some headway prior to the first board meeting, but there are many decisions required.

Once AVCSD polices are in place the separate plans go away, explained Nelson.

Vicki Poh, speaking for employees in the former EQSD, addressed directors and said that there is a significant pay scale difference. She said one employee with 15 years more experience and more certifications is scheduled to receive less than another individual.

Poh said at this stage there is no resolution or time schedule for directors in making decisions about employees. She requested the board set a hard date in order to relieve employee stress over wages.

“We’ve made it clear this is a temporary issue,” said Director Bill Martin.

He went on to explain that the board needs time to examine all personnel issues and make decisions.

“We understand it could take some time,” Poh conceded.

“Give us time to do it right,” said Director Doug Ely.

Poh still asked directors to do things in a timely manner. She said that when some employees were making 30 percent less than others “it was hard to swallow.”

Churchill said that all issues have profound effects on the new district and that all employees will be consulted before final decisions are reached.

Brown said that it was difficult to put a hard date on when they will reach their decisions. “We don’t even have a personnel committee,” he said. Four members were elected to that committee a little later in the meeting.

Churchill asked for volunteers from the directors for special committees.

Felker said that having four people per committee was the best way to operate. Nelson agreed saying this was one of the advantages of having a large board — in this case 10 directors.

Martin and Directors Dick Castaldini, Kim Kraul and Felker volunteered to serve on the budget committee.

Churchill said he was the only director on the QCSD compliance committee, but Kolb said he would serve with him.

“Others can stand in,” Churchill recommended about directors filling in temporary vacancies.

Churchill also thought a business management committee would be a good idea. Other committees might also be needed.

Nelson said the board was required to pass a resolution indicating a regular schedule for meetings.

The board discussed whether it should meet during the day, or at night to allow members of the public to attend.

Nunn pointed out that at the last joint meeting three members of the public were present.

The board voted 8 to 1 in favor of establishing the second Thursday of each month at 9 a.m. for the regular meeting. Brown cast the no vote. He preferred night meetings.

There was discussion about where the large board could meet, but no decision was reached. Neither the East nor West office has enough space to manage the larger group.

Brown said he thought meetings should be publicized in an effort to get the community more involved.

The new AVCSD board is short one director. It was up to directors to determine whether they wanted to fill that vacancy.

Marcie DeMartile, of the Plumas County Clerk-Recorder’s Office and an elections official, said that the paperwork submitted to her from AVCSD said that there “shall” be 11 directors. Her point was they needed to fill the vacancy.

Churchill said that they could go to a general election to fill the vacancy if necessary, but no one discussed that option.

Directors voted to leave the 11th seat vacant at this time.

On the agenda it was listed that directors would have the general manager submit the paperwork to PERS (Public Employees’ Retirement System). Nelson said that since AVCSD has no general manager Churchill could submit the information.

Nelson said that it was important that PERS be notified of changes right away. This is a new agency and the changes wouldn’t be automatically made within the system.

Nunn said that East and West have had two different ways of dealing with new hookups. West has had new build owners bring in their design so the district could go over the plans. East has not done it that way.

The owner of an existing mobile home park in East Quincy is planning to add more than 20 new pads. Nunn said that she and Poh have discussed the differences in East and West practices.

Green said that in the case of the mobile home park, the units are not individually metered. There are a total of three meters throughout the park and one main sewer connection system.

Green also said that most of the units were for permanent mobile homes, but a few were for travel trailers where people stay for a few months and then move on.

Martin said the district needed to protect its own interests. He didn’t want to see them involved with allowing the landowner to pay for units as they became occupied. “Renter occupancy is not our problem.”

In March 2017, both services districts voted to consolidate in a special meeting. The move was recommended to increase chances of obtaining a grant to help pay for the state required $26 million wastewater treatment plant.

In 2008, both districts were only days away from a consolidation agreement when that plan fell apart.