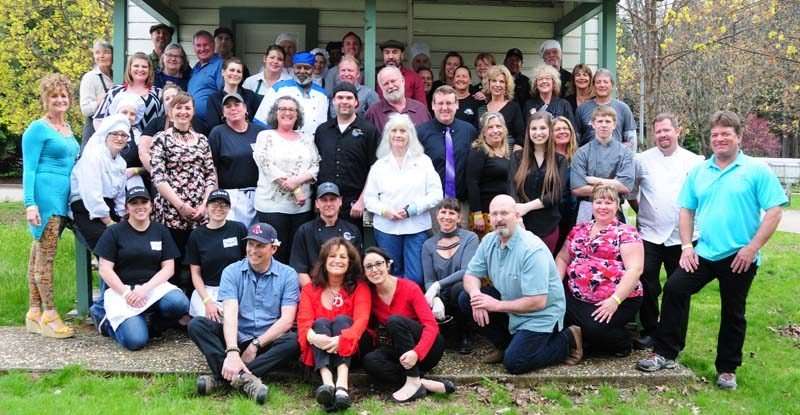 The stars of the 2017 Taste of Plumas held April 22 at the Plumas-Sierra County Fairgrounds are the chefs and restaurant owners, business wineries and local brewers that bring their culinary artistry to an appreciative public. Photo by Sierra Moon Photography
News
May 9, 2017May 5, 2017 Staff

Taste buds were tingling at the 11th annual Taste of Plumas on April 22 at the Plumas-Sierra County Fairgrounds. A record-breaking capacity crowd filled the big room at the fairgrounds for this very important fundraising event for Plumas Arts.

“I am so pleased with how the event turned out this year. We had a record number of restaurants involved, new and innovative non-alcoholic beverages and a wall-to-wall crowd,” commented event organizer Kara Rockett-Arsenault. “We owe it all to the restaurants and to the several hundred people that purchased tickets and made donations to the auction and we are so very grateful that people step up year after year to support Plumas Arts.”

The Taste of Plumas invites attendees to vote for their favorite samplings in several categories. Every participant received numerous votes in the categories that they entered.

The results of the People’s Choice vote tally include:The Knook’s lasagna soup was the front-runner in the soups category. The tomato bisque by the Plumas County Jail’s “Bridges to Mise en Place” program deserved an honorable mention. The favorite in the breads and sandwiches category was the smoked tri-tip slider with jack BBQ sauce and onions on a king’s Hawaiian roll served by Neighbors Bar-B-Que.

The Brewing Lair was on hand with its local brewed beer and the wine from Evergreen Market, The Drunk Brush and other featured wineries was plentiful.

Neighbors Country Market partnered with Plumas Botanical Medicine Clinic to provide refreshing non-alcoholic beverages and tonics. It can be truly said that a-good-time-was-had-by-all and that everyone was impressed by how all the restaurants shined like the stars on this beautiful Spring evening.

Plumas Arts invites everyone to save the date of April 14, 2018 now for the 12th annual Taste of Plumas.