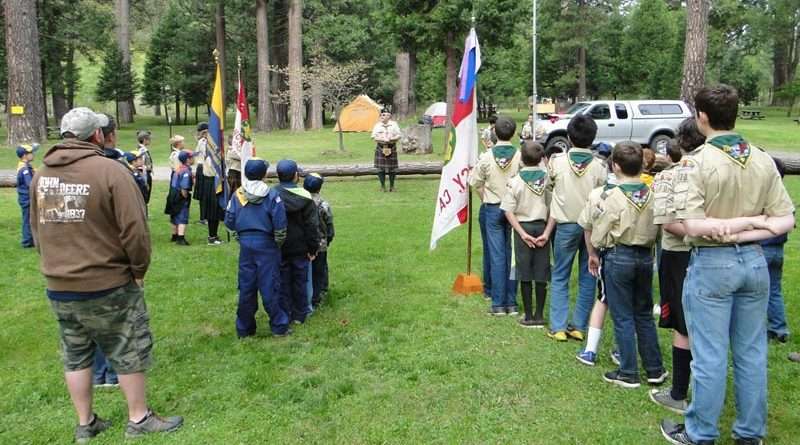 Seven Boy Scout units from Lassen and Plumas counties assemble for last minute instructions prior to the raising of the American Flag and the start of the May 4-6 Camporee and Scottish Highland Games. Almost 50 Scouts enjoyed beautiful weather and challenging events at the Taylorsville Park in Indian Valley. Photos courtesy of Troop 36
News
May 19, 2018May 16, 2018 Gregg Scott, Staff Writer

Seven Scout units from across the Lassen District of the Nevada Area Council gathered together at Taylorsville Park the weekend of May 4 through 6 for the annual District Spring Camporee.

This year’s theme was focused on the Scottish Highland games that comprised the afternoon competitions and many of the boys and adults came dressed for the occasion.

After dinner, a quick informational “Cracker Barrel” let the youth leaders know what the sequence of events would be for the next day.

When all appeared to be ready to take on Saturday’s challenges, it was off to get a good night’s sleep in preparation.

Bright and early Saturday, the Scouts assembled in dress uniform, many with kilts, for opening ceremonies that included Presentation of Colors by Chester Troop 36 and a few last minute instructions.

Right after opening flag ceremonies the units broke up by age with the Cub Scouts taking on the archery, bb gun, and sling-shot ranges, and the Boy Scouts joining Plumas Sheriff Sgt. Mike Grant and long-time Plumas Search and Rescue team member Ralph Schroeder for instruction on the Boy Scout Search and Rescue Merit Badge.

Three to four hours later, every Scout that attended the class had completed the requirements to earn the badge.

During the same time the Cubs were rotating their numbers through the various shooting sports and many said the time had flown by because all of a sudden it was lunchtime.

Many thanks go to Susanville Supermarket that provided enough of their supersized deli sandwiches to feed almost 50 Scouts plus their adult leaders. Accompanied by chips, fruit, cookies and drinks everyone seemed to be completely satisfied.

The afternoon was all about the Scottish Highland Games.

The competitive games included the caber toss, rock throw, tomahawk throw and tug-o-war. The Scouts also had the choice to use the shooting sports ranges as well.

The caber toss included three age appropriate log weights. The 10-foot long logs had three weight classes for different age groups with the idea being to toss it end over end (once) and have it land as close to the centerline as possible.

The rock throw is of course how far you can throw your rock. Again, different weights for different ages — 10- and 12-pound rocks for the younger boys and 15 and 17 pounds for the older boys.

One of the favorite events is always the tomahawk throw where the boys are scored on sticking the most “hawks” as close to the center as possible.

The throws are made from a distance of 15 feet or more dependent on the thrower’s choice.

Tug-o-war was also a popular venue and probably the loudest as the teams yelled, grunted and were loudly cheered on by the spectators.

There was “nary” an event that didn’t help encourage an appetite for dinner.

Thanks go out to Sav Mor Foods in Quincy for donated pounds of Tri-tip and Holiday Market in Chester for the delicious macaroni and fruit salads.

Lots of compliments were heard for the barbequed tri-tip, Scotts Ranch Beans and two salads dinner. Some folks thought the cooks were related to Houdini the way it disappeared.

Closing flag ceremonies were performed by Quincy Troop 130 with a hand from a Troop 151 Scout and then it was over to the fire ring for some final fun.

Many Scouts and ‘Scouters’ think closing campfire is the epitome of Boy Scout campouts.

One scoutmaster put it this way. “It’s a time to reflect on the lessons learned, challenges conquered, friends made and the joy of enjoying the creation God has given us. It doesn’t get any better than that.”

A young Scotsman by the name of John McRae drove over to Taylorsville from Reno to add a bit of authenticity to the evening with several tunes on his bagpipes.

McRae’s son is a Boy Scout in the Reno area.

Songs, skits and walk-on jokes along with some competition results were the order of the evening and a very nice closing bagpipe song that included what we know as “Taps” and “Amazing Grace.”

Right after the “Scouts Own” service Sunday morning, came finishing up the service project for the park, a thorough final cleanup and the happy drive home to respective communities.

The Lassen district Committee extends a special thank you to the Plumas County Board of Supervisors for allowing the Boy Scouts to “take over” the park for their Scouting experience.