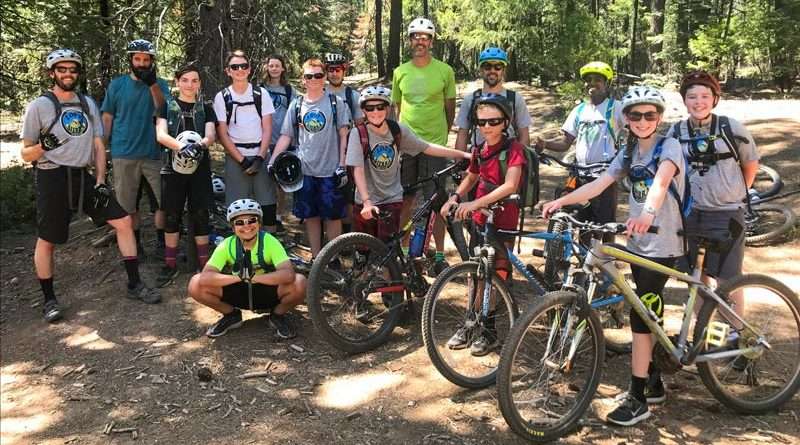 “Biking is just something I love to do,” says Dana Ludington, a science teacher at Quincy Junior-Senior High School. “It’s fun!”

Ludington is right at home as an outdoor enthusiast here and her words are underscored by a big smile. Thanks to the teacher’s efforts, Plumas County now has its own bicycling team specifically geared for middle and high schoolers — the Lost Sierra Composite Mountain Bike Team — whose 22 members attend sixth- through tenth-grades at local schools in the Plumas Unified School District, at Plumas Charter School and some are home schooled.

Open to all students in the county, the team has received vital support from the surrounding communities and even won a national grant competition, largely due to Ludington’s commitment and inspiration.

The teacher is an avid biker and a winner of the famous “Triple Crown” of regional mountain biking races, getting the best overall time for the Lost and Found Gravel Grinder, the Downieville Classic and the Grinduro.

“In addition to her efforts with the team and the grant,” said QJSHS Principal Mongiello, “Dana is just a great addition to our staff. She provides an innovative and engaging learning environment for our students and shares her passion with these young riders. They are so pumped to be a part of the team. During lunch and nutrition break, instead of playing video games, they are shopping for their dream bikes or watching mountain bike videos. It’s pretty awesome.”

Ludington is a mountain biker with a vision and she knows how to get things done.

“Riding a bike is such a fun way to get outside and experience nature and Plumas County is home to tons of great bike trails like Mt. Hough,” she explained. “I just wanted to see if I could put together a team for students. I was really just going to spend this year researching and planning the logistics.”

Like any worthwhile project, forming the mountain bike team took a lot of effort. Her goal for the 2018-19 school year was to earn her coaching license from the NorCal High School Cycling League and figure out how to start a team.

But community support for the idea was so strong that the team came together quickly. They began with a GoFundMe page to cover the coaching license costs of $250.

“We ended up raising $1,340,” the bicyclist-coach said. From there, they did a taco-dinner fundraiser at La Sierra Lanes and a Lost Sierra Bike Night at West End Theatre, both in Quincy. In addition, Ludington and the team received donations from individuals and businesses, in total raising about $4,000.

The team was off and running.

A native of El Portal, Ludington came to Quincy to attend the Feather River College Outdoor Recreation Leadership program about 10 years ago and never left. After graduation from FRC, she earned her teaching credential and Masters in Education from Chico State.

“In my program at Chico, we talked a lot about how rich a rural experience can be,” she said, “and it’s empowering for rural students to understand how special their home really is.”

She went on to explain that Plumas County is an up-and-coming area for mountain bicycling and that the Mt. Hough trail draws riders from hundreds of miles away, something that might not be well known to those outside of the biking community.

“A lot of the kids on the (new) team had no idea that our trails are famous!” Ludington commented. “I want our local kids to be a part of this growing mountain bike community.”

Along with her fellow coaches, the teacher-coach is an unpaid volunteer and she wanted to be sure no one would be turned away for lack of a bicycle. The NorCal Cycling League was able to supply a few loaner bikes and local cycling enthusiasts donated a few more.

With funding, coaches and bikes in place, the Lost Sierra Composite Mountain Bike Team started training earlier this year. At first there were five members, mostly kids who had never mountain biked and were primarily interested in just learning to ride better. They met on Tuesdays at QJSHS and rode up the trail behind the school to reach the “Q” landmark that is visible on the hill overlooking Quincy. On Thursdays and every other Sunday, they rode the South Park or Mt. Hough trails. More and more kids starting showing up.

Ludington chose to form a “composite team” so that all students could participate, regardless of where they go to school. The team has had one member participate in a league race this year while other members are focusing on learning skills and having fun. The Sierra Buttes Trail Stewardship, a strong supporter of the team, is acting as the fiscal sponsor while the team works to achieve its nonprofit status.

It was while at the NorCal Cycling League’s Coaching Summit that the cyclist teacher first heard Specialized Bicycles had a grant, through their foundation, called Riding for Focus, which supplies bicycles for a physical education program in middle schools.

The Specialized Foundation’s grant program is designed to provide schools with everything they need to get middle-school students riding, including a turn-key physical education curriculum, comprehensive teacher training and a fleet of bike and safety equipment. But the program offers more than just bikes and gear. Riding for Focus provides a combination of cycling, fitness and academic performance, all while instilling in students a lifelong passion for cycling.

Ludington described the process, saying the group completed its application and made it to the next round. They had to submit a three-minute video showing how Plumas County schools and students would be a good fit for the program. Their video focused on student demographics and on the fact that there is a bicycle trail adjacent to the high school campus.

Quincy High was able to demonstrate that the school could effectively implement the requirements of the grant, which are to follow a six-week bicycling curriculum for middle-school students for at least two years.

“Out of 150 grants awarded nationwide, only three were in California,” Ludington said with justifiable pride, “and of those three, two are here in Quincy. (Plumas Charter School was also awarded a grant from the Specialized Foundation). We have easy, bike-able access to several trails right from our campus. It’s a perfect location for a bike program, the only thing we were missing was (enough) bicycles.”

Thanks to the grant, Quincy High will have 41 new bicycles and helmets for middle school PE classes to use starting in the 2019-20 school year. The Specialized Foundation also provides the six-week curriculum plus a summer training program for P.E. teachers who might be new to teaching bicycling to a group.

The curriculum will focus on basic bike safety and operation before moving onto technique and training routines to improve fitness and skill. The goal of the program is to help students gain mastery and confidence not just on the bike trail, but also in the classroom with new strategies for focus and concentration.

Principal Mongiello is also a mountain bicycling aficionado and welcomed the new program saying she was pleased by the enthusiasm around creating a mountain biking team.

“Considering all of the well-known races and trails in Plumas and neighboring counties, it makes sense,” Mongiello said. “Dana is a decorated mountain biker herself. She’s won many of the local races and has huge support and respect from the mountain bike community. We’re excited to have the team! It promotes a healthy lifestyle, which is great for the body and mind, and it also gives a different option for students who are not interested in traditional high school sports.”

The principal added that she believes the bike program will bring benefits for Plumas County students.

“Physical exercise is known to promote positive effects on brain function, ranging anywhere from molecular function to behavioral support,” Mongiello said. “We actually will have two P.E. teachers next year and they are both very excited to incorporate riding into the curriculum.”

Ludington dreams about seeing how the Riding for Focus program and the student team can mutually benefit from an increased interest in biking. In the future, she also hopes to see more branches of the Lost Sierra Composite team form in each community.

“Wouldn’t it be great to have a bike repair and maintenance shop right on (each) school campus where students could learn to care for the school’s fleet of bicycles?” she asks, her eyes lighting up. “My vision is for our teams to be supportive of each other. Really, mountain biking as a sport is so much about challenging yourself. Regardless of whether you want to race or just tool around on the trails, once you start biking, it’s something you can do and enjoy for the rest of your life.”

Cary Dingel is a marketing and media tech specialist with the Plumas County Office of Education.