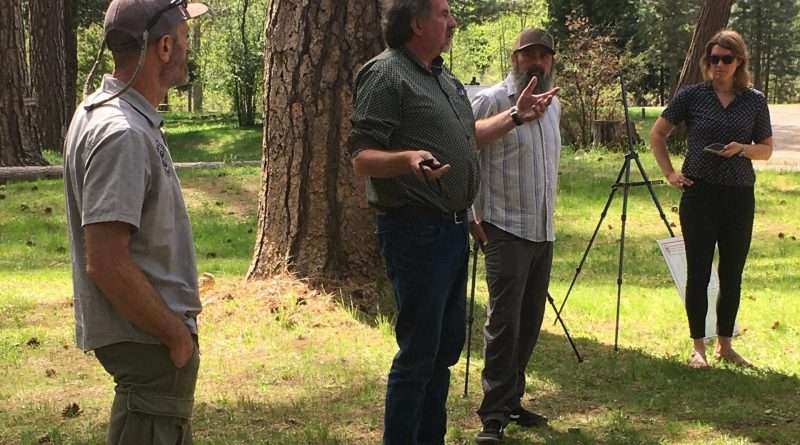 Rep. LaMalfa visits Taylorsville Campground—a future trailhead in the Connected Communities Project—for a Q&A about the project. Agency partners hope for financial support and advocacy in Washington D.C. Photo by Meg Upton
News
May 7, 2021May 14, 2021 Editor
By Meg Upton

Billed as an Outdoor Recreation Roundtable, agency partners in District 1 came together at the Taylorsville Campground with Congressman Doug LaMalfa and his staff to discuss their push for the “Lost Sierra Route” and the idea of linking 15 Sierra communities through trails, and thus creating a much needed economic boost for tourism in the region.

The Lost Sierra Route would be multi-use trails (both motorized and non-motorized bikes, horseback riding, hiking).

The various representatives of the above agencies made their case for why the trail project is needed as part of an effort to revitalize communities in the northeastern Sierra.

Phase one of the Connected Communities project began in 2020 with a grant from Sierra Nevada Conservancy (which used California Proposition 68 funds for the project) to plan, map, and develop the project based on existing trails and surveys from communities on where access and trail heads should be. The next phase consists of the environmental impact and environmental work to be done to proceed.

According to the Outside Industry Association, $1.94 billion is spent on recreation in District 1 each year—with increases during COVID lockdown when so many of California’s urban dwellers sought refuge in the great outdoors. Tourism and in particular—outdoor recreational tourism is the big industry of District 1. Promoters and advocates like Greg Williams of Sierra Butte Trails Stewardship, wants residents and representative LaMalfa to understand the possibilities.

“COVID showed the importance of everyone getting out in nature,” said Williams. Williams believes through public-private partnership and local Sierra community involvement that the dream of this 300 miles of trail can come to fruition.

Connected Communities Project has surveyed local residents –with 1200 filling out online and print surveys thus far that have come back 99 percent in favor of trails being a priority.

“Input has been amazing,” said Williams.

Rep. LaMalfa began asking questions of the assembled representatives early in the talk. He inquired as to whether state mandated COVID lockdown had impeded the work of the US Forest Service, and he returned often during the two-hour meeting to NEPA (National Environmental Policy Act) and his impression that it was obstructing economic progress. He repeatedly gave the example of a hypothetical culvert needing a three -year study because of NEPA rather than just being able to “just get it done.”

Various US Forest Service employees with science backgrounds responded to LaMalfa about the need for study and research and observation over multiple seasons to determine environmental impacts of development. Multiple people responded to LaMalfa’s COVID inquiry that the wildfires of the past five years actually had a much more dramatic and overwhelming effect on the USFS—much more so than COVID lockdown did (many acknowledged working on computer based projects during the time).

LaMalfa urged that projects should “move quickly toward what people want.”

Presenters, including Williams, kept the focus on the work so far and the “power of the partnerships” between public and private entities to get the gargantuan tasks done with less money available. “It’s a pretty streamline process. Trails are a tool to bring the economy back. When there hasn’t been enough funding for staff, a combination of contractors is working on the project—that’s why the stewardship was born,” said Williams.

The Sierra Butte Trails Stewardship had 37 employees before COVID and will have 40 youth in its summer program this season to work on trail maintenance.

Plumas National Forest Supervisor Chris Carlton said “nothing good gets done alone” in reference to the importance of all entities to work together. “Recreation is huge and here to stay. People want to get outside. The traditional model was ‘let’s go put trails in somewhere,’ but today we want to be responsive to where the community wants to go,” said Carlton, “as public servants we are here to serve.”

Nearly all presenters also brought some stark realities into sharp focus for the Congressman and others: there are jobs in the forest service and local towns but it’s hard to attract and recruit new residents to revitalize the area for many reasons. Some of the reasons discussed were lack of affordable housing or even available housing, competitive wages, childcare, and high speed Internet access for those thinking about relocating and working from a new home in the Sierras.

Sierra Brewing Company representative Mandy McKay spoke on her company’s embodiment of outdoor recreation culture and also chimed in that they too were having trouble hiring back staff and were now doing signing bonuses to attract people.

The problem of finding more people to work in the region seemed to cut across nearly all the agencies and groups present across much of District 1.

Training youth and training parents to respect the forest was one piece of the puzzle—and eventually field trips on the trails to get more people involved in wanting to work for trail creation and maintenance was discussed.

In Downieville area COVID era tourism was up, according to business leaders from there, with 50 percent of tourists last year reporting it being their first time in the region. Tourists were staying an average a day longer. And at least in Downieville and Truckee, second home trends are beginning.

“This is very constructive information,” LaMalfa replied toward the end of the discussion, “I want to make things here. Build here. Employ our own people here.” He added that he did not vote for the Great American Outdoors Act because of what he saw as riders incongruous with the intent of the bill.

Greg Williams thanked everyone for their commitment to the project “what do we leave behind us as a lasting legacy.”

After the Q& A presentations the 28 or so people assembled continued talking one on one. Poster boards of maps and potential Main Street trailheads that will one day connect the trails with towns and thereby connect recreation to economy were available to ponder. The entire afternoon felt to the participant like good ideas, change, partnerships, were combining to bring about positive sustainable growth in the region and the murmur of the assembled was hopeful.

Now advocacy of the project—and future funding possibilities—are in the hands of the Rep. LaMalfa to advocate for his constituents.

For more specific information on the project, go to the Sierra Butte Stewardship Trails website www.sierratrails.org.