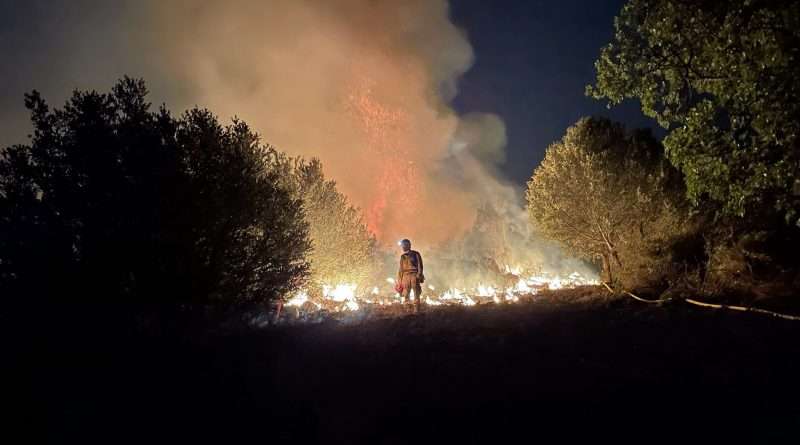 When using an indirect approach to fighting the fire, backfiring can be an effective tool. When the timing is right, they light a backfire along the inside of their fire line and the rising air from the main fire draws the backfire away from the ridge and into the main fire. Photo courtesy USFS
News
August 30, 2021September 2, 2021 Editor

Fire managers often talk about building either direct or indirect line on the fire.  What is the difference and why does it matter?

Building direct fire line means building fire lines directly at the fire’s edge with no un-burned fuel between the firefighters and the line they are building.  This is often described as “one foot in the black” or “anchor, flank, and hold.”

Anchor, flank, and hold means the fire line is started at the “heel” or base of the fire and proceeds up the flanks, often using a firehose or possibly an air-tanker, to knock the fire down. That is followed closely by firefighters digging a hand line or dozer line until they are able to reach the head of the fire and stop the forward spread.

Direct attack works best in light fuels like grass or heavier fuels when the fuel moisture is high enough to limit the rate of spread and intensity of the fire.  It also works well in a forest when only the fuel on the ground is burning.  The flame lengths have to be low enough to allow firefighters to work in close and the rate of spread has to be such that firefighters have a reasonable chance of getting around the fire before it spreads beyond their reach.

For these reasons, it is usually the preferred method of fire fighting.  It limits the number of acres burned and is the safest method … until it isn’t.

In the wrong situation, namely fast moving and intense fires, direct attack can be both dangerous and futile.  Sending firefighters out day after day to employ the wrong tactics can expose them to undo risk and waste precious time if at the end of the day no real progress has been made.  Deciding when to shift from direct attack to indirect attack is one of the more critical decisions firefighters must make.

So what is indirect line or indirect attack?

Indirect attack is a method of fire suppression where control lines are located at some distance away from the main fire edge and the intervening fuel is burned out.

During the first few days of the Grizzly Fire, firefighters made a valiant attempt to use direct attack to corral the fire.  But each day the fire out paced them and at times was hot enough that firefighters had to abandon their fire lines.  Eventually they made the decision to switch to an indirect attack as their primary strategy.  But even then there were times and places where direct attack was the safer and more effective method so they mixed tactics as appropriate to the situation.

The fire fight on Grizzly Ridge right now is a classic example of indirect attack. The fire is far too hot, and can move far too quickly to even consider putting firefighters in close enough for a direct attack.

Instead, they are making good use of Grizzly Ridge to build a very wide defensible line using hand crews, dozers, and masticators, and backing that up with an extensive hose lay and air-tankers laying in a solid line of retardant.  When the timing is right, they light a backfire along the inside of their fire line and the rising air from the main fire draws the back-fire away from the ridge and into the main fire.  This starves the fire of additional fuel as it tries to burn towards the ridge top.  The use of, natural features, firefighter-constructed features, air support, and carefully applied fire are all the elements of an indirect attack and so far they are working very well on Grizzly Ridge.  They are doing a great job of protecting the communities along the Highway 70 corridor.

The next challenge is turning the corner and building line to the north on the north end of Lake Davis.  Let’s wish them continued success.