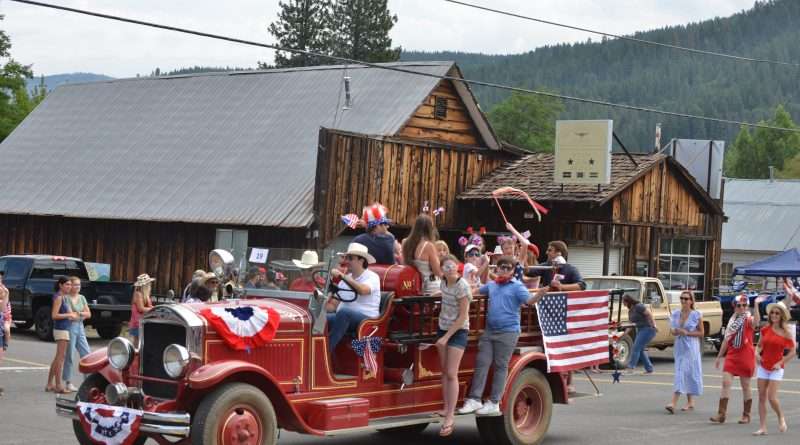 Taylorsville’s 4th of July parade is back with hundreds of people descending on downtown Taylorsville for the celebration. Photo by Ryan Upton
News
July 5, 2021July 9, 2021 Editor

Indian Valley saw two full days of events and family fun over the weekend—a sign of recovery from COVID, if there ever was one, with visitors to the area along with residents taking part in the events.

On Saturday, The Cy Hall Memorial Museum saw its grand opening. The museum that normally opens every May through October, never opened in 2020. The “extra” year to prepare for re-opening and the new transportation exhibit paid off handsomely as many projects at the museum got some much needed TLC while closed. This includes the honor garden in front and to the side of the museum where fresh wildflowers have been planted and bricks engraved with the names of local veterans have been placed. A separate article will detail the new happenings at the museum. The first history talk of the season is this Thursday, July 8, at 7 p.m. will be given by Kest Porter on the history of transportation in the valley.

Across the street in downtown Greenville, Levi Mullen has opened an ice cream shop within Ken Donnell’s Musicland. The ice cream shop saw its grand opening on July 3 as well, with free samples. The new venture called Imaginary Illusions, also serves as a gallery of Mullen’s artwork, also for sale. The shop is open when Musicland is open: Wednesdays through Saturdays from noon to 5 p.m.

Across the valley in Taylorsville, the first 4thof July dance in two years occurred on Saturday night. The first hours saw families with small children enjoying the bouncing dance floor in the Taylorsville Historic Hall, while the second half of the evening was all about dancing after the young ones were sent to sleep. The Taylorsville Historic Hall was able to raise a little over $3,700 to help pay the taxes and other expenses of the hall badly needed after the its closure in 2020.

Sunday, the 4thof July saw the Indian Valley 4-H celebrating and helping to serve the Indian Valley Museum’s 50thpancake breakfast for residents and Silver Buckle Rodeo visitors in front of the Gem and Mineral Museum in Taylorsville. There was a constant crowd of valley visitors and locals for the outdoor hometown breakfast, that was organized by the Indian Valley Museum, including all of the  planning, purchasing, cooking, setting up tables and grills, decorating, and cleaning up.

.At 10 a.m. Taylorsville seemed at least four times bigger than usual with hundreds of people turned out for the annual Taylorsville 4thof July parade. The Taylorsville Tavern celebrated its grand re-opening the night before, with morning mimosas and bloody marys for parade goers while Young’s Market served up caffeinated beverages for those trying to pace the day. Sawyer Foster set up a lemonade stand on the edge of activities in front of Foster’s barn.

Indian Valley Fire Department set up a recruitment booth to get more residents interested in volunteering with the fire department. They also sold T-shirts to fundraise for the department. They stressed being short handed and the need for more recruits.

Vietnam War Era veteran Roger Blackburn was the grand marshal in the parade. The Merced native has made his home in Indian Valley and was clearly beloved by many in attendance with his many years of involvement in ranching and cowboy life.

Silver Buckle Rodeo Queen contestants were the newly graduated from high school Lacie Banchio and Emma Kingdon, who rode together along with the Indian Valley Riding and Roping Club.

This year’s parade was long enough that there was no need to circle around a second time through Main Street with classic cars, emergency vehicles and small floats with children all decked out in red, white, and blue for the occasion of the United States 245thbirthday.