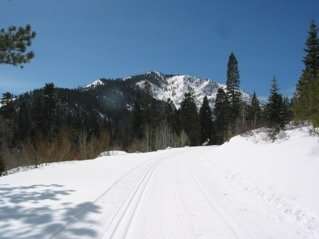 Fresh snow at Plumas-Eureka State Park results in groomed ski and snowshoe trails for all to enjoy the winter wonderland of Plumas County on Jan. 6. Photo by Ken McMaster
News
January 7, 2021January 10, 2021 Editor

As of Jan. 6, the trails received their second grooming of the season, but only from the Jamison side. The Museum side has melted considerably, with many open spots to pavement. This condition is not conducive to grooming equipment.

The skiing is pretty good though and overall on the Jamison Trailhead system, especially after the first couple of hundred yards, skiers will be rewarded with good tracks and skating lanes. About four miles of trails are available groomed including: Jamison, Campground, Upper Campground and Camp Lisa with many passes to flatten out.

McMaster sends out a special thank you to all who have supported the PESPA volunteer grooming program in the past as no state funds are used for the program. “If you haven’t this year, please consider donating to our efforts to keep them ongoing,” said McMaster, and of course, “gratitude to all the volunteers who donate their time to the trails.”

All funding for the grooming program comes through donations to PESPA at P.O. Box 1148, Graeagle, CA 96103. There is also a donation slot on the Museum door at the Museum Trailhead. “There are no trail fees, but we do wish that you consider donating to the program. Suggested donations are $5/day per person, $25/person for the season and $40/family for the season,” said McMaster.

Volunteers try to groom trails after each snowfall and weekly to freshen them up. No walking is allowed on any of the trails. Dogs are not allowed on the main trails, but a separate dog trail is groomed and accessible across from the Jamison Trailhead (a beginner trail of approximately one mile out and back).

A porta potty is in place.

“This season we are actively recruiting new ‘Ski Patrol’ members to assist with our winter program,” said McMaster. Ski Patrol members work to dig out equipment and help with trail grooming. “They also serve to pass on important safety rules and history to the public to help them best enjoy one of California’s premier winter destinations, Plumas Eureka State Park,” said McMaster.

More information on volunteering is available at 994-1050.

“Go out and enjoy winter skiing and snowshoeing!” summed up McMaster.

Jamison Trail: Groomed, set track and skating lane, some thin spots, gets much better about 1/3 mile out.

Plumas-Eureka: Open, not groomed (last groomed 1/1/21) several open areas without snow and a little rough in some places because of tire ruts.

It applies to back-country areas outside of developed ski areas only.For daily avalanche advisory information, go to the SAC website at www.sierraavalanchecenter.org, or phone 587-3558.