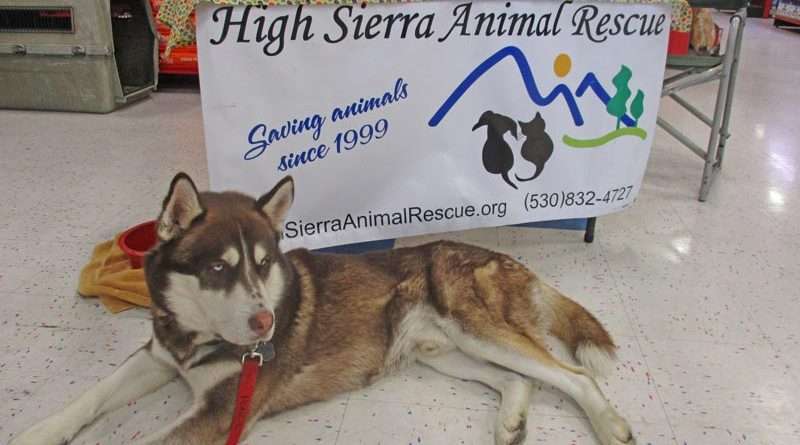 Dexter is one of many sweet, adoptable dogs that have been given a second chance at finding a forever home through the work of dedicated staff and volunteers at High Sierra Animal Rescue. Photo submitted
News
December 18, 2019December 24, 2019 Lauren Westmoreland, Staff Writer

This article is the first of a series, putting a spotlight on the good works of High Sierra Animal Rescue, and a call for support from the community.

High Sierra Animal Rescue opened its doors in May 1999 with a mission to save as many homeless animals as possible from being needlessly euthanized. The rescue started up in response to a great need in Plumas County.

In the beginning, the group of passionate rescue volunteers was comprised of six people. “We really grabbed a tiger by the tail when we started all of this 20 years ago,” laughed president and chairman of the Board at High Sierra, Doug Rodrigues.

“A woman named Terry Popish kicked off the whole thing with her dream of rescuing adoptable animals in Plumas County,” said Rodrigues. “My wife, Betty, had a 45-minute conversation with Terry one day and that was it.”

Thus began 42 weeks of meetings, with volunteers planning, engaging in rescues, and undertaking the arduous process of becoming a registered 501c3 nonprofit organization.

He recalled what the rescue environment was like for dogs and cats in the area, saying, “In the three years prior to HSAR (1996-1998), there were an estimated 200 adoptable dogs and 300 adoptable cats being euthanized here in Plumas County.”

The animal shelter in Quincy at the time had only six kennels, located outdoors in the elements, according to Rodrigues.

“The early years were very challenging,” he said. “High Sierra Animal Rescue has since worked to create a strong relationship between Plumas County Animal Services and HSAR.”

Rodrigues went on to explain that at that time, the county intake was around 1,200 animals a year with approximately 675 either being returned to their owners or adopted to a new owner.

There weren’t any options in the area for the animals, with no other 501c3 rescue groups operating in Plumas County at the time.

This kicked off a plan for the good of the animals and the community and led to a time of building within the organization.

“In the early years, the main focus was figuring out how to save 500 animals a year when we were just starting our rescue operation,” Rodrigues smiled.

The rescue group also set goals to be no-kill (for all adoptable animals) by December 2002, as well as developing a resource for boarding rescue dogs until a permanent shelter could be completed.

Rodrigues says that having a strong, diversified board has been a saving grace for the rescue time and time again over the years, through a variety of challenges.

Another thing that kept everyone going, through the throes of compassion fatigue, was keeping focused on the “why” of it all.

“We always say, let’s focus on the dogs, because they are the reason behind all of this work and the reason to push on,” Rodrigues said.

The group kept a sense of humor as they worked with each animal, with each dog bringing unique quirks and personality to the rescue scene.

Rodrigues laughed at some of the memories of the early days he and his wife recalled, saying, “Perhaps 17 years ago now, one of the original HSAR board members lived up on Grizzly Road east of Portola. She was fostering one of the rescue dogs, a border collie, during the Christmas season. Well, the dog got out one night and proceeded to pull down all the lights on a neighbor’s outside Christmas tree. The neighbor took the incident in stride and the border collie got adopted shortly thereafter.”

As time passed and goals were being met, the biggest challenge became building and funding the shelter that is currently in operation in Delleker. Up until the construction of the building, volunteers took on as many fosters as they could, but the need for the building was becoming more and more evident.

Thus, began another chapter at High Sierra, with construction on the shelter beginning in early 2001. In order to ensure that all current and future donations went to the homeless animals in need, the Rodrigueses took on the task of financing the building.

“We could not get conventional financing since this would be a very specialized building — not a regular home or business building),” Rodrigues recalled. “We put up all of our investment assets to get a line-of-credit with the Royal Bank of Canada.”

The project was over $200,000 into construction, with site prep and stem walls for the building completed, when 9/11 hit. Stopping the construction at this point was not an option. This ultimately led to the couple mortgaging their home. The line of credit and mortgage on the shelter were completely paid off this year.

The shelter was designed to not only provide a safe place for homeless animals, but also to give back to the community.

“We made sure there were boarding facilities included in the plan from the beginning,” Rodrigues said. The boarding services provide income for the shelter, in addition to providing a safe environment for pets whose owners are on vacation.

Rodrigues credits High Sierra’s early success to a few things, such as the startup of PAWS in Quincy in June 1999, networking with the San Francisco SPCA, and setting an aggressive no-kill goal.

With a firm foundation and a passion for the animals, High Sierra gained momentum, becoming a valuable resource to the community.

The group has had a large impact on ending and continuing to end the killing of adoptable dogs in the county, providing humane education especially for young children, and by being a lifeline for homeless animals.

Rodrigues also noted that High Sierra Animal Rescue has been working to help the community manage the pet population through spay and neuter certificates, as well as spay and neuter grants and programs.

All of this currently creates full- or part-time employment for an average of 10 county residents. “We have some wonder why we don’t solely use volunteers, and the main reason is that the dogs need reliability. We have to know that someone will be there to water and feed the dogs, every single day,” Rodrigues noted.

“We really value our employees and our volunteers, in addition to our board of directors,” he added. “If you’re going to be here at the shelter, you must have a compassion for animals. Our current group of employees are a cohesive team focused on helping the dogs.”Looking to the future, HSAR has identified the long-term needs that are critical to the ongoing success of the rescue and mission behind it.

High Sierra’s new Volunteer Coordinator, Marty Heinrich, has been hard at work building a core need; the volunteer program at HSAR. The goal of the volunteer program is to provide support to the shelter, foster care for dogs in need, participate in fundraising events, and to help with adoptions — the heart of the rescue business.

Another aspect of support at High Sierra is the board of directors. There are currently six board members, and according to Rodrigues, every one of them are passionate about saving the lives of homeless, less fortunate animals in need.

“We are currently looking for a board member that is a CFO or has retired as a CFO, as seven is an ideal number of board members for our organization,” Rodrigues said, inviting interested members of the community to reach out.

A key item in keeping doors and arms open to pets in need, Rodrigues said, is ultimately a balanced budget.

Small businesses, particularly small nonprofits are among the hardest hit with the minimum wage rising so much. Larger businesses will typically add the additional cost into their product pricing.

For High Sierra Animal Rescue, that’s not really possible. “If we increase our adoption fees to cover increasing costs, we will not likely adopt out very many dogs,” Rodrigues went on.

As a nonprofit, High Sierra is looking to the community for help through financial donations. “Our only hope to balance the budget is to increase our revenues and, in our case, being a nonprofit, we have to increase donations, and we feel that the only way to survive is through monthly giving,” said Rodrigues.

“There are numerous worthy national and international organizations such as the SPCA, Humane Society and Best Friends; however, by supporting an organization like HSAR, you are helping homeless animals in need right in your own community,” Rodrigues said.

The best way to help is create social change and support the animals in need is to become a Guardian of High Sierra Animal Rescue.

Guardians contribute a monthly tax-deductible donation towards the shelter’s operation and rescue expenses, which can be done by visiting highsierraanimalrescue.org or calling 832-4727.

“Their future is in your hands,” Rodrigues said. “Without HSAR, hundreds of animals would have been needlessly euthanized.”

The rescue hopes to continue to help adoptable animals in need, but they can’t do it without the continued support of the community.