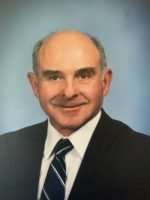 He was born on July 12, 1926 in Winnemucca, Nevada to George and Mabel (La Pointe) Hoskins. In his youth, he enjoyed hunting quail and pheasant with his parents in Paradise Valley. Ted attended Winnemucca Grammar School, and Winnemucca High School. He was very active in athletics, including football, basketball and track, and was the Nevada State shot put champion in 1944.

Eager to serve his country, Ted joined the U.S. Marines shortly after graduating high school in 1944. Following his time at Camp Pendleton, he shipped out to Saipan, and then Okinawa. During his time in the service, he survived a kamikaze attack on his ship, and later helped in the clean up of Nagasaki.

Upon returning to the United States in 1946, Ted met the light of his life, Betty Hopkins. (There was always much mirth over the similarity of their last names.) Ted and Betty were inseparable from the time of their marriage in Richmond, California on October 17, 1948, until his passing.

After his time in the military, Ted chose to follow in his father’s footsteps and enter the banking business. Ted worked for the Bank of America from 1949 until his retirement in 1987, working at branches in Albany, Westwood and Alturas, California. In 1967, Ted was made manager of the newly opened Mt. Shasta branch, and, in 1972, the branch in Quincy in Plumas county, where he worked until his retirement.

In his work and his communities, Ted was known for his dry sense of humor, his public speaking skills, and his love of pranks. Always generous with his time and his resources, and active in his community, Ted took great pride in his participation in such organizations as the Rotary Club (president), Lions Club (president), the Masons and the Chamber of Commerce. He was also the treasurer of his churches in Westwood, Alturas, Mt. Shasta and Quincy, as well as a member of the Westwood School Board.

Ted’s family was always the most important thing in his life. Though offered important positions in Sacramento and San Francisco, he chose to raise his family in the beauty and the peace of rural Northern California, for which his children will be forever grateful.

In the 1960s, Ted would pack up the station wagon and drive his family across country, visiting National Parks and historic monuments, instilling in them his love of his country and of the open road.

Starting in the 1970s, Ted and Betty travelled extensively, eventually accomplishing his goal of visiting all 50 states, and six of the seven continents. (Ted and Betty never made it to Antarctica, but perhaps the next time around…) Ted’s philosophy of travel (and of life) was: “Try everything at least once.”

Per Ted’s wishes, there will be no service. Donations in Ted’s name may be made to the Plumas District Hospital or the Plumas County Museum. In consideration of current circumstances, the family will schedule a celebration of Ted’s life at a later time.

We are eternally grateful for Ted’s presence among us for 94 years and wish him well on his journey. To paraphrase Shakespeare’s Hamlet, “He was a great man; we will never see his kind again.”