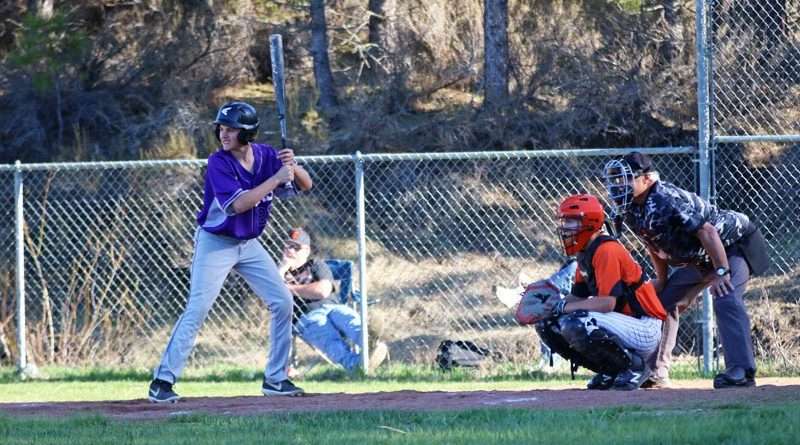 Portola and Quincy met for the one and only time this season in a doubleheader at PHS on April 30 and the teams shared the victories.

In the first game, the Trojans pulled out on top of the Tigers. Quincy came out on the scoreboard at the top of inning one with four runs, Tigers zero.

The Trojans scored another three runs in the top of the second inning, but the Tigers found their way to the scoreboard with four runs.

QHS boys were unable to get past the Tiger pitchers in the top of the third inning and the Tigers came back strong with four additional runs. The score sat at 8-7, Portola.

QHS returned the favor and scored four runs of their own in the fourth inning and did not allow a single Tiger to cross home plate, 11-8 QHS.

In the fifth and final inning, QHS scored four runs to widen the lead and allowed PHS two runs, but it wasn’t enough for a Tiger victory.

Wicks had his invisible cape on and stole four bases! Hunter Cabral stole two bases and Sheridan and Sampson also managed to steal a base from QHS.

Drew Helbig served as catcher for Portola to pitchers Cade Wilmer, Chandler Ross and Irving Juarez. Only Juarez was able to strike out a Trojan and he got two of the 25 he faced.

Wicks stole two bases as did Cabral and Juarez stole one. James Sampson served as PHS catcher to senior pitchers Chandler Ross and Hunter Cabral. Pitching the majority of the game, Cabral faced 23 batters and struck out eight. Ross took on two batters and stuck them both out, nice relief!

The Tigers are 6-11-1 overall and 1-3 in league play. Quincy Trojans are 7-11 overall and 3-5 in the league. It is always so great the way the boys put in so much effort for the rivalry games and play their best games.

The Tigers split doubleheader victories with the Chester Volcanoes at CHS on April 27. The teams only met once this season, but they packed all the good stuff into the pair of Saturday games.

In one of the best contests of the season, the Volcanoes and the Tigers lit the field up with spectacular plays and hits.

The game started off looking like the Tigers might walk away with it. They came on strong, scoring four Tiger runs in the first and second innings.

Chester managed a single run in the bottom of the first inning.

But in the third inning, the tables turned. Portola was only allowed a single run while the Volcanoes racked up four runs. The score was 9-5 heading into the fourth inning. Both teams excelled adding five runs to each side of the scoreboard, Tigers 14-10.

In the fifth inning only Portola scored, two runs, to widen the lead, 16-10. PHS scored a single run in the sixth inning and Chester added two, 17-12.

Heading into the seventh and final inning, Portola casually added another run to their lead, ready to walk away with the victory and then WHAM! Chester exploded and the Volcanoes burned hot with seven runs to WIN by a single run. It was a sneak attack!

Contreras hit two doubles and Brent and Davidge each hit a double. Bereznak was invisible as he stole four bases.

Volcano pitching was handled by Contreras, Davidge and Stelzriede. Davidge struck out one batter of 12 faced. Stelzriede faced 28 batters and Contreras faced 14.

Wicks, Jackson Powell and Cabral all stole two bases each. Helbig stole a base, too.

In the second game, just 20 minutes after the first game, the Tigers came out on top in a five inning game. The teams matched each other with two runs each in the first inning.

Only CHS scored a run in the second inning.

Portola scored two runs in the third inning and Chester scored one run to tie the game up 4-4 heading into the fourth inning.

The Tigers put two runs on the board in the fourth and Chester added one, 6-5.

In the fifth inning Portola added two more runs and CHS boys were held to zero to end the game for PHS.

Portola runs were scored by Wicks and Cabral each with two runs and Helbig, Ross, Juarez and Sheridan. Ross hit three RBIs. Cabral and Sampson both hit two RBIs each. Cabral hit a home run and Ross hit a double.

Wicks stole three bases of four attempts. Cabral stole two and Helbig and Ross both stole one base successfully.

Helbig served as catcher to freshman Tiger pitcher Sean Sheridan who stood alone on the mound. Facing 26 batters, Sheridan struck out four and threw a total of 93 pitches in the game.

Chester runs were scored by Nick Brent (2), Bereznak, Contreras and Davidge. Juan Flores is credited with the only RBI. Davidge hit two doubles and Contreras hit one double.

The Chester Volcanoes are 5-7 overall and sit 3-3 in the league.