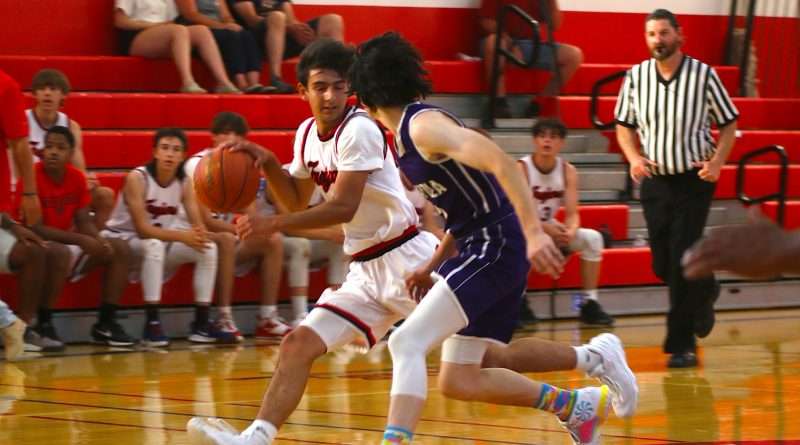 The Quincy Trojan boys won the home rivalry basketball game with the Portola Tigers June 4 by a score of 62-53. The two teams ran neck and neck the majority of the contest. The Trojans took the lead in the first quarter (14-6) but eventually lost it to the persistent Tigers who battled hard to catch the Trojans. At the half the score was 39-24 QHS. In the third period the Trojans were held to 5 points while the Tigers racked up 17 to bring the score to a closer 44-41 with Quincy in the lead but having lost it a few times. Quincy pulled away in the last minutes of the fourth quarter, after a PHS/QHS traditional rivalry struggle for top position, to win. “Quincy played very well,” said Portola head boy’s basketball couch Tim Brubaker. “They shot the ball really well. Especially Kai (Hostetter). My guys competed, we just didn’t shoot well.”
Portola junior Michael Stewart scored 21 points for the Tigers with a pair of 3-pointers in the mix and 3/9 from the free throw line. Senior James Sampson, and juniors Enrique Flores and Sean Sheridan all scored 6 points for PHS. Flores scored his 6 points with to 3-pointers. Seniors Owen Bowling, Dylan Gonsalves and Rafael Silva all added four Tiger points. Bowling landed his sinking 4/6 free throw shots.
Stewart picked up 14 rebounds, evenly split between defense and offense. Sampson, Sheridan and Bowling all gathered up 8 rebounds. Gonsalves fouled out of the game, Sheridan came close with four fouls and Bowling had three. Stewart and Sampson made 12 2-point shots during the game each, Stewart landed 75 percent, Sampson 25.
For the winning Trojans, Kai Hostetter certainly did have an amazing game. He landed 2/2 free throw opportunities in the first period, five 3-pointers in the 2nd period plus another free throw shot. In the 4th quarter Hostetter sank another 3-pointer and three of four free throw shots for a game total of 24 points.
Kaleb Dupras scored 15 Trojan points, three of four free throws and six 2-point field goals. QHS Hayden landed a 3-pointer, a two-pointer and two free throws. Nick Caiazzo sunk two baskets for 4 points, Jon Swan hit two free throws and a basket and Drew scored two free throws and a two-point field goal.
Trojan girls win 42-35
The challenging Tigers tested the Trojans all the way to the final minutes on the court in the last game of the season. The biggest space between the two teams came with the ending score. Point by point, back and forth, the girls traveled the court taking turns with the high score. Portola Abby Klemesrud added the most points for the Portola team with 16. Six 2-point field goals, a 3-pointer and one of two free throw shots. PHS Lelani added 9 points, a 3-pointer, two field goals and 2/4 free throw shots. Mya Wilson hit a 3-pointer and a field goal for 5 points. Annie Folchi sank a 3-pointer and Mary Sheridan sank a 2-point basket.
For the Trojans it was junior Lexi Baumgartner scoring 18 points that boosted the QHS girls past Portola. Baumgartner’s total includes 5/5 from the free throw line, a trio of 3-pointers, and a pair of 2-point field goals. Freshman Emmary Wingfield and Annie Froggatt both put in 3-point shots at opportune times in the rivalry contest. Tess Hydrick landed six points plus 2/4 free throw shots for an 8-point total. Tatum Hughes, Makenna Crosby, Kayla Thackeray, and CoraGrace Hardee all added 2 points for the Trojans.  “Our girls did a great job during this Covid 3-week season,” said coach Terry Baumgartner. “It was a challenging season and they improved a lot each day. We only lose one senior off this year’s team so the future is bright next year for the Lady Trojans!” said coach Baumgartner.
And so that is it for High School basketball. There will be no playoffs this year but the parents, coaches, students and support staff were able to pull off a quick season and everyone involved seemed to be very happy about that.  Here’s to starting our sports season all over in Fall 2021.

Compiled by Mari Erin Roth [email protected] Lake level has begun to recede at Lake Almanor; it is down a couple…

Twenty-two players braved the heat for the final round of the two-round 2021 GMWGC Captain’s Cup June 17. The format…

Hitting the greens in Graeagle