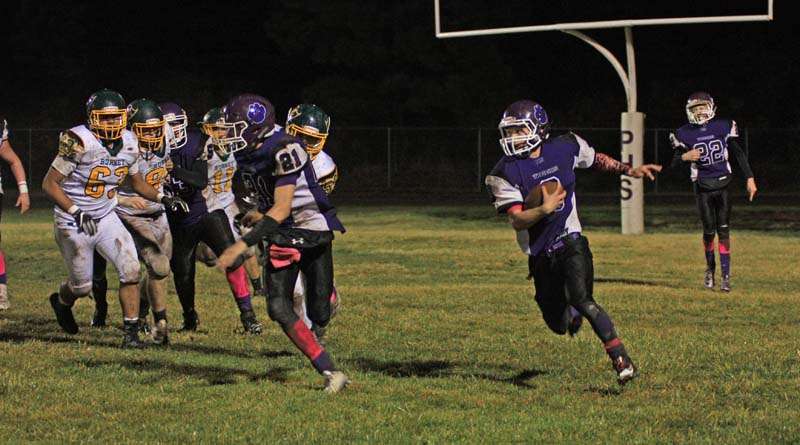 The Tigers fell to 0-9 overall on the season and 0-5 in league play.

Prior to the game, Portola honored its seven seniors with a senior recognition night for the final home game of the year.

Portola came flying out of the gate on the first play from scrimmage when Lowdermilk took the ball 77 yards to the house. A missed extra point gave the Tigers an early 6-0 lead.

The rest of the first half would be all about Burney however, as the Raiders put up 34 points in the first two quarters to take a commanding lead at halftime.

In the second half, the Tigers offense reawakened and the home squad found life, when Lowdermilk found the end zone once again and followed with a successful two-point conversion.

The Raiders would answer twice more to jump out 48-14 in the late going, putting Portola in an even bigger hole.

Late in the fourth quarter, the Tigers struck again. A long ball from quarterback Eric Jacobson to Vukobradovich set the Portola offense in excellent field position.

On the ensuing play, Lowdermilk continued his big night and found his way to the promised land for the Tigers’ final home score of the season.

Portola could not finish the comeback and fell 48-20.

The Tigers end their regular season on the road against St. Vincent de Paul high school in Petaluma on Saturday.

The Indians improved to 5-4 overall and 4-1 in 8-man south league play.

Tristin Clark went 3-for-6 at quarterback with 43 yards passing, one touchdown, and one interception against the Bulldogs.

Zach Pew had one catch, which was a 21-yard touchdown catch, while Alex Tassone had one reception for 17 yards.

Greenville hosts Redding Christian for the first round of the playoffs on Friday night.

The Quincy football team suffered its first loss of the season in Biggs on Friday night.

The Trojans, previously 8-0, are still the favorite for the top seed in the playoffs. Quincy now possesses an 8-1 record overall and 3-1 in Mountain Valley League play.

Quincy wraps up its regular season on Friday when it visits MVL foe Maxwell.

Chester finishes the regular season at Burney this Friday night.

No stats for the game against Maxwell were available at press time.

The Golden Eagles dropped to 0-8 on the season and 0-3 in conference play.