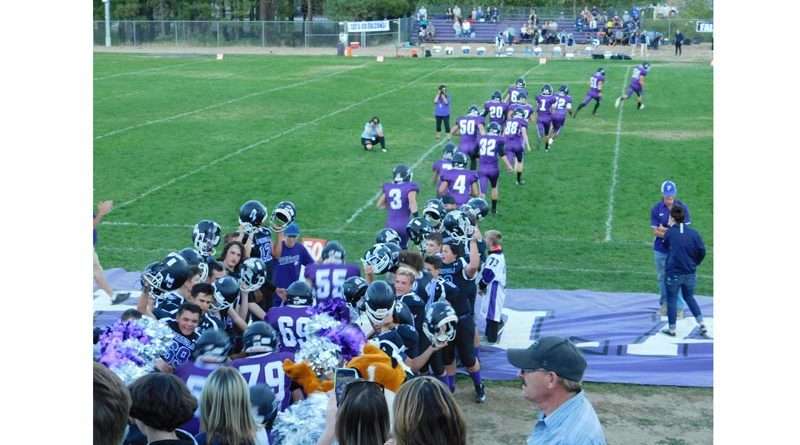 The Tigers burst on to the field in front of their hometown fans Aug. 30.
Sports
September 18, 2019 Mari Erin Roth, Sports Editor

The Modoc Braves were the most recent football team to feel the Tiger bite as they came to Portola Sept. 13. The Braves headed home as the latest to fall to the PHS Tigers, 13-6.

The winning streak for the PHS team started right out of the gate. The Tigers won the first game of the season as they took on the Coral Academy Falcons. The big predator birds traveled all the way from Reno on Aug. 30 to have their feathers plucked by the Tigers in Portola. The victory was a solid 21-6 and PHS fans soaked up every minute of the win under clear skies and perfect temperatures as summer heads out of town.

The Tigers were a slow moving train that rolled right over the Falcons. Both teams scored a touchdown in the first quarter, but only the Tigers scored on the extra point to lead, 7-6. Then PHS just kept on rolling with a TD and extra point in the second quarter and a repeat performance in the third quarter totaling the final score of 21-6.

The Tigers took that first victory to heart and stretched it all the way out to Foresthill Sept. 6 where they again won beating the Wildfires 26-21 on the Foresthill home field.

The Wildfires took the lead in the first quarter with a TD and an extra point. The Tigers scored the touchdown but missed the extra point, 7-6 Foresthill. That one point was all it took for the Tigers to feel the heat on their tails and they burned through the Wildfire defense to score TWO touchdowns plus extra points to lead at the halftime 20-7.

The Wildfires matched the Tigers in the third quarter, each team scoring a TD but no extra points, 26-13.

The Wildfires rallied in a big way to score a TD and 2-point conversion in the fourth quarter, but it was only enough to get closer, not enough to win the game from the fiercely wild Portola Tigers, 26-21.

Receiving senior Keegan Folchi had two carries for a gain of 25 yards and junior Owen Bowling advanced 27 yards with one reception.

Gonzalves and Curren led the Tigers defensively with 10 tackles each. Junior Carver Wearin and Folchi landed nine tackles each. Bowling, Mulhall and junior Xander Loomis each had five tackles.

The Tigers were really tough on the Foresthill quarterback with five sacks! Loomis put him down twice and Bowling, Ruiz and senior Chase Nielson all got in a turn.

Curren was the “Kickoff and Punt King.” His five kickoffs traveled 144 yards, averaging 28.8 yards each. Two punts traveled 66 yards down the field averaging 33 each.