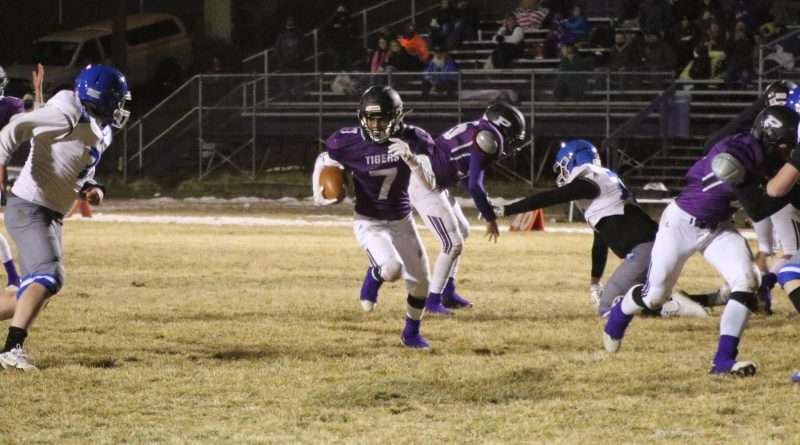 It was a very chilly 37 degrees as athletes from Portola and Loyalton took the field for the first Plumas County high school athletic competition in a year. “We are thrilled to get the boys back on the field playing football and trying to get some normalcy back in their lives!” said PHS head football coach Steve Heskett. A smattering of family members were permitted to occupy the stands, and half a dozen cars parked on the opposite side for extreme distance viewing, honking and cheering.

Portola High School quarterback Dylan Gonsalves led the Tigers in a triumphant win over the Loyalton Grizzlies (39-0) March 12 at PHS. Gonsalves threw 10 passes with four completions averaging 9.3 yards each for a total of 44.6 yards. Three Tiger touchdowns were scored by senior Shane Curren who also kicked in 9 extra points for a game total of 27 points!

Gonsalves carried the ball three times for an additional 37 yards rushing and scored a TD in the process. Diogo Juarez lead total yards rushing with four carries, 105 yards, and a Tiger touchdown. Curren had a total of nine carries for 65 yards rushing. Senior Zach Mulhall had two carries for 20 yards and senior Carver Wearin had a single carry for 15 yards.

Juarez led the Tiger defense with seven tackles. Wearin and Loomis made five each. Bowling made four tackles. Xander Avila, Zach Mulhall and Lucas Hellbig landed three tackles each. Morrison, Curren, Miles Silva and Rafa Silva all contributed to two tackles each. Sampson and Curren intercepted Grizzly passes. Sampson carried his 15 yards; Curren brought the ball to the ground in one.

A few competitions have been scheduled, pending weather and variable conditions of Covid status, but fans are not invited to attend, not quite yet. Things are moving in a positive direction with athletes not only able to get on the field to practice but allowed a few face-to-face contests with challengers. In support of the effort by athletes, coaches, staff and families to bring competitions back to the field, results will be reported but for now, schedules will not.